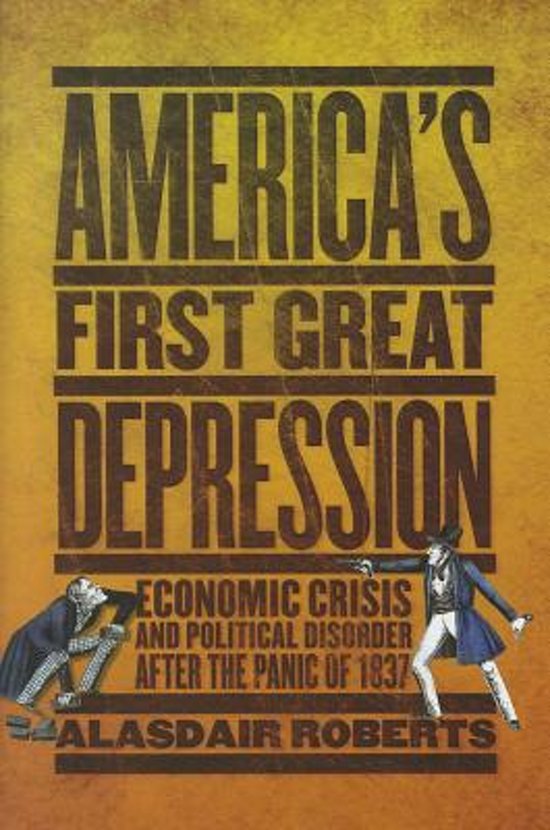 For a while, it seemed impossible to lose money on real estate. But then the bubble burst. The financial sector was paralyzed and the economy contracted. State and federal governments struggled to pay their domestic and foreign creditors. Washington was incapable of decisive action. The country seethed with political and social unrest. In America's First Great Depression, Alasdair Roberts describes how the United States dealt with the economic and political crisis that followed the Panic of 1837. As Roberts shows, the two decades that preceded the Panic had marked a democratic surge in the United States. However, the nation's commitment to democracy was tested severely during this crisis. Foreign lenders questioned whether American politicians could make the unpopular decisions needed on spending and taxing. State and local officials struggled to put down riots and rebellion. A few wondered whether this was the end of America's democratic experiment. Roberts explains how the country's woes were complicated by its dependence on foreign trade and investment, particularly with Britain. Aware of the contemporary relevance of this story, Roberts examines how the country responded to the political and cultural aftershocks of 1837, transforming its political institutions to strike a new balance between liberty and social order, and uneasily coming to terms with its place in the global economy.
Toon meer Toon minder

Alasdair Roberts's poignant yet balanced account of the financial, economic, and political crises of the 1830s and 1840s provides us with a distant mirror reflecting our current travails. By not knowing and learning from history, we continue to make the same mistakes our ancestors did. If you want to complete your education, America's First Great Depression is a good place to begin. -- Richard Sylla, Henry Kaufman Professor of the History of Financial Institutions and Markets, New York University, co-author of A History of Interest Rates Alasdair Roberts tells a wide-ranging story of the depression that began in 1837 with lucidity, emphasizing the role of global financial markets and finding plenty of analogies to the economic problems of today. -- Daniel Walker Howe, Pulitzer-Prize-winning author of What Hath God Wrought: The Transformation of America, 1815-1848 The parallels between pre-industrial America's 1837 financial crisis and that of our own time are particularly strong. The beauty of Roberts's book is that the reader can see the entire arc of the crisis, from beginning to end, in a historical context.... Roberts nicely combines narrative history with analysis. His book is accessible to both the expert and the novice in economic history. Highly recommended. -- Daniel Littman * Forefront * Roberts's book is based on careful archival research that is quite uncommon in the study of public administration anywhere.... He dubbed his method the macrodynamics of administrative development, which is somewhat visible in Leonard White's four-volume administrative history and, more important, acknowledges the need of attention for both human agency and institutional context.... The book is well written and in my view an attractive example of how administrative history informs the present. * American Review of Public Administration * Roberts provides a striking picture of the decade's economic woes, drawing extensively on contemporary commentaries from both sides of the Atlantic and informed by a vivid sense of American geography...The author of a damning critique of the Bush White House, as well as books on government secrecy and on the architecture of neoliberal regulation, he is not an economist but a scholar of public administration. A principal aim of America's First Great Depression is to assess the political outcomes of the economic turmoil, at both domestic and international level: what were its effects on the nascent party system, on tensions between states' rights, federal efficacy and executive power, on territorial expansionism? -- Tom Mertes * New Left Review * Roberts makes a valuable contribution to the scholarship of nineteenth-century economic downturns and their impact upon American society. He succeeds in showing that the Panic had a significant ripple effect through American society and that these historical examples can serve as useful references as Americans deliberate how best to recover from the damage caused by the 'Panic of 2008.' Importantly, Roberts illustrates how a severe economic downturn impacts a society well beyond just the world of finance. We should hope that America's First Great Depression will be a catalyst for further examination of nineteenth-century business cycles and economic downturns. * Essays in Economic and Business History * Roberts examines the financial, political, and social upheavals that occurred in the United States in the decade following the Panic of 1837, which he calls the First Great Depression.... Parallels to the country's current economic recession are clear throughout the text, and Roberts makes explicit comparisons in his conclusion. This timely book will be of great use not just to students of economic history but also to readers who wish to find historical precedent for today's uncertain, turbulent times. * Library Journal * For the first 50 years after achieving independence, Americans had every reason to believe theirs to be the most fortunate of nations. Then came the Panic of 1837, which caused a hopelessness rendered worse by the optimism that had preceded it and resulted in a crisis that lasted until 1848.... Alasdair Roberts reveals how this disaster led to epochal shifts in policy and culture, and his lively narrative and commitment to character ensure that the human cost is never out of sight. Roberts is especially keen to demonstrate how this mid-19th century ordeal relates to America's current woes. The 'hard times' of the 1830s led to financial ruin for state governments, a near-cessation of federal aid, and an outbreak of violent protests in many major cities. * Publishers Weekly * By recasting the Panic of 1837 as the start of the 'First Great Depression,' this book offers a clear attempt at creating a usable past' that can help modern citizens understand how our current unsettling economic landscape is not the first one Americans have been forced to navigate. -- Sean Patrick Adams * The Pennsylvania Magazine of History and Biography * Alasdair Roberts has written a thoughtful and timely book about how Americans in the past responded to global economic and political forces beyond their control. Roberts masterfully reinterprets the period for historians, but his goal is not primarily historical. Political scientists, policymakers, and citizens have much to learn from the economic crisis following 1837. -- Johann N. Neem * Political Science Quarterly * America's First Great Depressionis an engaging book that could spark classroom debate on a number of important topics: internal improvements, the changing role of state governments, Anglo-American relations, immigration, urbanization, Jacksonian democracy, the Bank War, tariff issues, and the federal role in regulating the economy, slavery, and westward expansion. Roberts does a particularly fine job of placing this period of US history within a global perspective. As it is only 216 pages of text, this reviewer will assign this book in his Early US History survey class. -- Dave Bush * The Historian *
Toon meer Toon minder