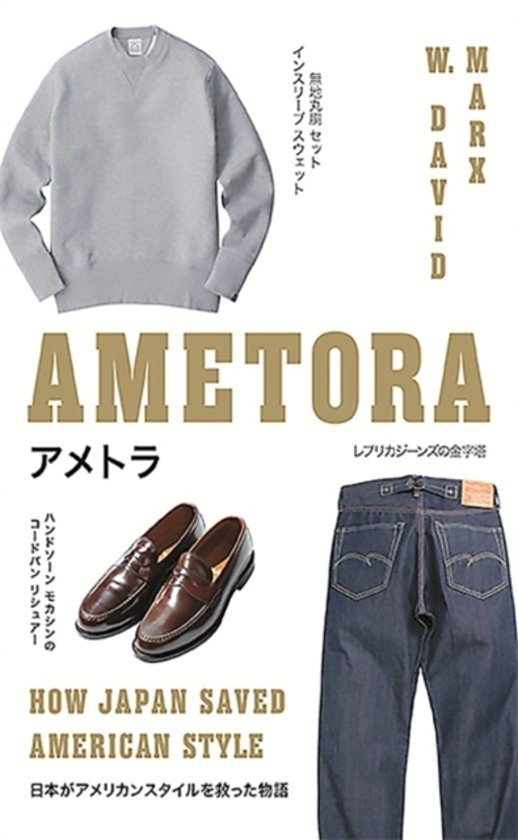 Look closely at any typically “American” article of clothing these days, and you may be surprised to see a Japanese label inside. From high-end denim to oxford button-downs, Japanese designers have taken the classic American look—known asametora, or “American traditional”—and turned it into a huge business for companies like Uniqlo, Kamakura Shirts, Evisu, and Kapital. This phenomenon is part of a long dialogue between Japanese and American fashion; in fact, many of the basic items and traditions of the modern American wardrobe are alive and well today thanks to the stewardship of Japanese consumers and fashion cognoscenti, who ritualized and preserved these American styles during periods when they were out of vogue in their native land.

In Ametora, cultural historian W. David Marx traces the Japanese assimilation of American fashion over the past hundred and fifty years, showing how Japanese trendsetters and entrepreneurs mimicked, adapted, imported, and ultimately perfected American style, dramatically reshaping not only Japan’s culture but also our own in the process.

B.J. Novak, Wall Street Journal, One of the best books of the year Ametora by W. David Marx traces the craze for American fashion after World War II in Japan, but it quickly becomes larger than that. It's a fascinating window into how fashion, culture and history intersect; you end up learning about several things at once. Wall Street Journal Mr. Marx writes with the understanding of how rich his material is. The scenes and the style trends in his book are not only interesting but often absurd. New York Times, Men's Style section In a step-by-step account, Mr. Marx traces the history of this cross-cultural sartorial phenomenon, from the Brooks Brothers-influenced 'Ivy League' look introduced by the fashion magnate Kensuke Ishizu in 1959 all the way up to Tokyo's neo-traditionalist designers of recent years. Entertainment Weekly Japan's exalted status in the fashion department seems like a given now--even non-sartorially inclined folks likely know Japanese brands like Comme des Garcons and Uniqlo or could recognize the trendy look of the Harajuku neighborhood. But perhaps less well-known is the fascinating decades-long dialogue between American and Japanese men's fashion that Marx skillfully explores here...It's riveting to follow as men swap their austere student uniforms from Japan's imperialist days for chicer garb, no longer ashamed to care about style. San Francisco Chronicle You'd be wise to put Ametora at the top of your 2016 style reading list. People A fascinating cultural history. GQ.com From perfect replicas of military jackets to denim made on old-school shuttle looms, the men's style scene in Japan was, at one point, a time capsule of classic Americana. But what caused that shift post-WWII? And how did it come to be that Japan often produces better versions of distinctly American designs (see: the bomber jacket, all forms of denim) than we do? [The] new book, titled Ametora: How Japan Saved American Style, answers these questions while unpacking this fascinating relationship between these two far-flung cultures. MensJournal.com W. David Marx's Ametora: How Japan Saved American Style is a fascinating cultural history that tells the story of how the country emerged from the Second World War and took now-iconic American styles -- from the Ivy League look to classic workwear -- made them their own, and maybe made them better. New York Journal of Books Exhaustive, analytical, intellectual, and thoroughly researched. Vogue.com Uniqlo. Visvim. Comme des Garcons. Ever wonder why some of Japan's pre-eminent fashion houses produce blue jeans, penny loafers, and cashmere sweaters? Historian W. David Marx looks into the phenomenon in his new book that explores the cross-pollination between American style and Japanese taste. Japan Times Sartorially savvy and rigorously researched, Ametora is a smart account of Japan's engagement with America through the lens of menswear. Kirkus Wholly intriguing... an important contribution to readers' understanding of cultural authenticity, the use of branding in media to sell consumer goods, and how representations of masculinity and rebellion evolve in the consumer marketplace. Bruce Boyer, author of True Style W. David Marx's Ametora answers the questions I had about the history and direction of menswear in Japan, and his research and analysis will undoubtedly be the authoritative word on the subject for years to come. This is a marvelously written, important, and necessary read for any student of global fashion today. Gideon Lewis-Kraus, author of A Sense of Direction W. David Marx's Ametora is a careful, complex, wildly entertaining cultural history of the highest caliber. This book will obviously be of immediate and considerable appeal to Japanophiles, classic-haberdashery connoisseurs, and other assorted fops, but its true and enormous audience ought to be anyone interested in the great hidden mechanisms of international exchange. In an age overrun with hasty jeremiads about the proliferation of global monoculture, Marx has given us quite a lot to reconsider. Ametora is a real pleasure. William Gibson, author of Neuromancer and The Peripheral A fascinating, finely-observed, highly readable history of the wonderfully unlikely rescue of iconic 20th Century American menswear by the Japanese who loved it when we no longer did. I had of course been aware that this had happened, but had never expected to see it reconstructed by a cultural historian of W. David Marx's very evident skill. Simon Reynolds, author of Rip it Up and Start Again: Postpunk, 1978-84 W. David Marx is our most insightful observer of the pop culture traffic between Japan and the U.S.A. Focused on fashion, Ametora tells the fascinating, intricate story of how Japan--the most style-obsessed country on earth--has beaten America at its own game, in the process established itself as the world's leading nation for curation, simulation, and mutation. Grant McCracken, anthropologist and author of Culturematic and Chief Cultural Officer This is what happens when a really smart person takes on a really interesting topic. Japanese culture and fashion come shining into view.
Toon meer Toon minder