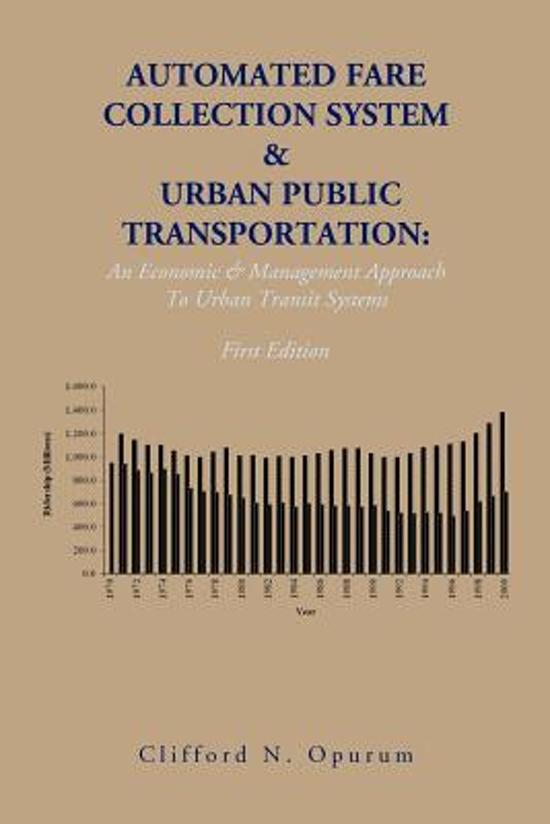 With its unique features (presented in nine chapters grouped into five major parts), Automated Fare Collection System And Urban Public Transit: An Economic & Management Approach To Urban Transit Systems provides a wealth of resourceful information to everyone with interest in mass transit: Part I: Public Transportation, Urban Economy And Automation in Fare Collection Part II: Models of Transportation Pricing Part III: Transportation Research Methods And Models Part IV: Approaches And Trends in Urban Transit Ridership Part V: Epilogue In these parts of the book, Clifford N. Opurum reveals the impact of the automated fare collection system on mass transit and particularly, on the New York City rail rapid transit system. Various effective urban public transportation pricing techniques are presented. Transportation research methods and models including the alogit model and different approaches to transportation research analysis are featured. Alternative scenarios of cost-benefit analysis (CBA) are used extensively along with other feasibility studies strategies to determine the economic and social benefits of the automated fare collection system. The author concludes that as in the case of other industrial sectors, the financial health of the transit industry is very much dependent upon the level of transit patronage, and that automation in fare collection has further encouraged the later. Furthermore, he added that automated fare collection (AFC) is preferred over the mechanical system of fare collection and will make positive impact on both transit ridership and revenue, if efficiently operated. Finally, he stressed that society would be better off financially if the benefits of automation in transit fare collection are fully utilized, and that automation in fare collection has indeed influenced the travel pattern of most mass transit patrons.