Becoming King Martin Luther King Jr. and the Making of a National Leader 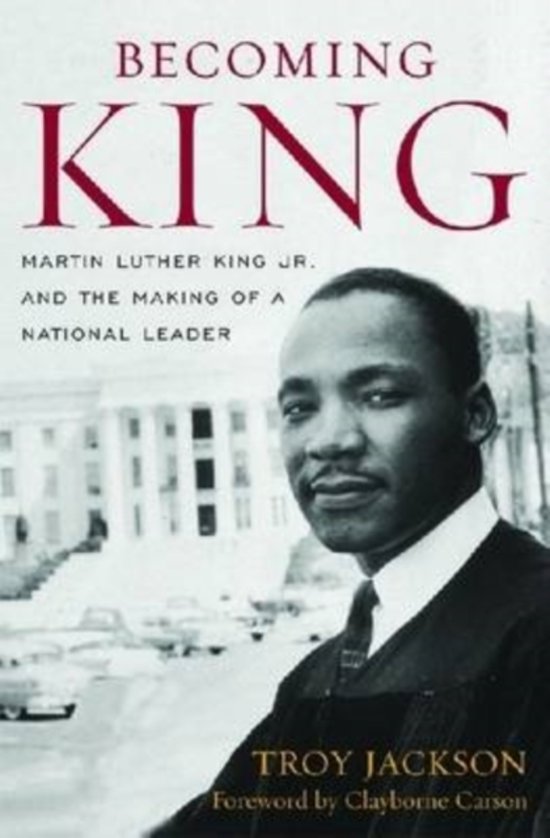 The history books may write it Reverend King was born in Atlanta, and then came to Montgomery, but we feel that he was born in Montgomery in the struggle here, and now he is moving to Atlanta for bigger responsibilities. - Member of Dexter Avenue Baptist Church, November 1959 Preacher - this simple term describes the twenty-five-year-old Ph.D. in theology who arrived in Montgomery, Alabama, to become the pastor of Dexter Avenue Baptist Church in 1954. His name was Martin Luther King Jr., but where did this young minister come from? What did he believe, and what role would he play in the growing activism of the civil rights movement of the 1950s? In Becoming King: Martin Luther King Jr. and the Making of a National Leader, author Troy Jackson chronicles King's emergence and effectiveness as a civil rights leader by examining his relationship with the people of Montgomery, Alabama. Using the sharp lens of Montgomery's struggle for racial equality to investigate King's burgeoning leadership, Jackson explores King's ability to connect with the educated and the unlettered, professionals and the working class. In particular, Jackson highlights King's alliances with Jo Ann Robinson, a young English professor at Alabama State University; E. D. Nixon, a middle-aged Pullman porter and head of the local NAACP chapter; and Virginia Durr, a courageous white woman who bailed Rosa Parks out of jail after Parks refused to give up her bus seat to a white person. Jackson offers nuanced portrayals of King's relationships with these and other civil rights leaders in the community to illustrate King's development within the community. Drawing on countless interviews and archival sources, Jackson compares King's sermons and religious writings before, during, and after the Montgomery bus boycott. Jackson demonstrates how King's voice and message evolved during his time in Montgomery, reflecting the shared struggles, challenges, experiences, and hopes of the people with whom he worked. Many studies of the civil rights movement end analyses of Montgomery's struggle with the conclusion of the bus boycott and the establishment of the Southern Christian Leadership Conference. Jackson surveys King's uneasy post-boycott relations with E. D. Nixon and Rosa Parks, shedding new light on Parks's plight in Montgomery after the boycott and revealing the internal discord that threatened the movement's hard-won momentum. The controversies within the Montgomery Improvement Association compelled King to position himself as a national figure who could rise above the quarrels within the movement and focus on attaining its greater goals. Though the Montgomery struggle thrust King into the national spotlight, the local impact on the lives of blacks from all socioeconomic classes was minimal at the time. As the citizens of Montgomery awaited permanent change, King left the city, taking the lessons he learned there onto the national stage. In the crucible of Montgomery, Martin Luther King Jr. was transformed from an inexperienced Baptist preacher into a civil rights leader of profound national importance.
Toon meer Toon minder

Anyone interested in Martin Luther King's growth into the man and icon we have come to cherish would do well by starting with this well-written, richly researched contribution to the historical literature. -- Louisiana History -- An important addition to the growing shelf of America's most famous civil rights leader. --Historian -- Clearly and persuasively written... should not only inform but also challenge reader to think more deeply about faith under pressure and about one's responsibilities to promote social and economic justice. -- Restoration Quarterly -- Jackson provides a handy bibliography and a fine narrative of the civil rights movement in Montgomery, Alabama. -- American Studies -- Becoming King is a concise and credible introductory text for students at the undergraduate level. Like effective, nuanced treatments of other wise monumental personages, Jackson humanizes Martin Luther King Jr., without diminishing his greatness. -- Journal of African American History -- Becoming King explores the iconic leader's first and most sustained intimate connection with local people within the civil rights movement. As such, the monograph provides further contemplation of King's legacy along with its place in the ever burgeoning civil rights literature. -- Georgia Historical Quarterly -- [Jackson] tells a remarkable story about how the local people of Montgomery in their fight for racial equality helped to shape the life of one of the world's greatest civil rights leaders. -- Alabama Review -- Jackson's book is a finely conceived and well-crafted volume that deepens our understanding and appreciation of the young King.... this study is not only a refreshing approach and great contribution to King scholarship but also a rich addition to the literature on southern religious historiography and culture. -- Journal of Southern History -- [Becoming King] illuminates how ordinary people's commitments to human rights and nonviolence inspired King as much, if not more, than he inspired them.... Troy Jackson abundantly demonstrates how King's religious faith drew strength from mass struggle. -- American Historical Review -- Jackson shows in glowing detail how King raised the sights of a local movement to encompass large moral issues and shaped the black struggle for freedom into a human rights movement with international dimensions...This book...is a fundamental freedom movement primer. -- Journal of American History -- Becoming King would be a wonderful addition for advanced high school and college students involved in history, religion, sociology...the themes he explores offer a thoughtful basis for debate and discussion not only about King and the civil rights era but the complexities and challenges of social change in our society. -- Teaching History: A Journal of Methods -- Jackson writes well of the transformation that took place, valuing the input of the Montgomery leaders and community to the minister's 'becoming King.' Highly recommended. -- Choice -- This short, well-written, and thoroughly researched account of the forces that made King a national leader should be studied by every student of the modern civil rights movement. -- Multicultural Review -- Becoming King is an interesting read filled with several new layers of information. Jackson effectively uses King's words to provide a boycott narrative that illuminates several aspects of the famous civil rights leader's ideological development and how King was able to inspire the working class of Montgomery to sacrifice their only means of transportation. -- Southwest Journal of Cultures -- Jackson's research and conclusions are vital to any attempt at fully understanding King's rise in prominence. -- Anniston Star -- Troy Jackson makes an important connection between King's early history and his ultimate role as a civil rights leader of the modern movement. -- Tennessee Historical Commission -- Immerse yourself in the people around King, and Martin Luther King's trials, oratory and strategizing in his fight for civil rights for all Americans. -- NDW Waterline -- Jackson does a wonderful job of demonstrating how King found the voice we know so well today and how the principles of non-violence that are so central to who King was were developed during his time in Montgomery. -- Indianapolis Star -- This account of the Montgomery desegregation struggle benefits from a subtle shift in focus to the ordinary men and women who served as the foot soldiers in the 1955 bus boycott. Jackson's storytelling skill and broad perspective make this a worthy addition to the literature of the U.S. civil rights movement. -- Publishers Weekly -- I know that King biographies comprise a genre unto themselves, and many are near classic in stature. This brand new one, still, stands out. -- Hearts & Minds Books Blog -- The author's comprehensive analysis of King's sermons before, during and after the boycott artfully depicts a man in transition, from naive do-gooder to world-changer. Jackson's treatment of Montgomery in the post-boycott era offers new insight into the void in leadership and the fractious infighting among the movement's luminaries after King departed the scene. An informed investigation of the struggles that defined a time and place -- and the man who gave them a voice. -- Kirkus Reviews -- In this excellent book, Troy Jackson offers a superb, nuanced account of Martin Luther King's relationship with Rufus Lewis, E.D. Nixon, JoAnn Robinson, Rosa Parks, and other key figures in the Montgomery Bus Boycott. A thorough researcher, Jackson argues convincingly that local activists in Montgomery decisively shaped King's identity as a civil rights leader. --Keith D. Miller, author of Voice of Deliverance: The Language of Dr. Martin Luther King, Jr. and Its Sources -- Jackson reiterates not just how King changed Montgomery's African Americans, but how they changed King; not just the absolutely significant role King played in the boycott, but what King derived from the boycott experience. Harvard Sitkoff, author of King: Pilgrimage to the Mountaintop --
Toon meer Toon minder