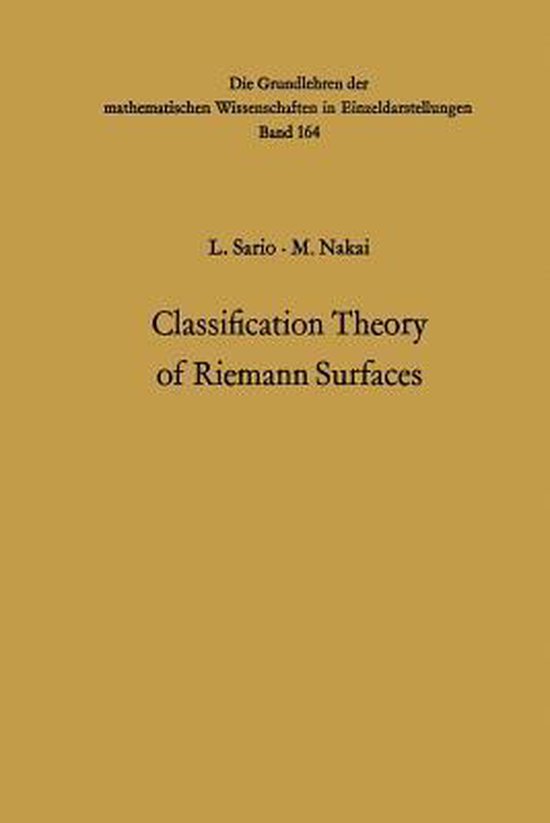 The purpose of the present monograph is to systematically develop a classification theory of Riemann surfaces. Some first steps will also be taken toward a classification of Riemannian spaces. Four phases can be distinguished in the chronological background: the type problem; general classification; compactifications; and extension to higher dimensions. The type problem evolved in the following somewhat overlapping steps: the Riemann mapping theorem, the classical type problem, and the existence of Green's functions. The Riemann mapping theorem laid the foundation to classification theory: there are only two conformal equivalence classes of (noncompact) simply connected regions. Over half a century of efforts by leading mathematicians went into giving a rigorous proof of the theorem: RIEMANN, WEIERSTRASS, SCHWARZ, NEUMANN, POINCARE, HILBERT, WEYL, COURANT, OSGOOD, KOEBE, CARATHEODORY, MONTEL. The classical type problem was to determine whether a given simply connected covering surface of the plane is conformally equivalent to the plane or the disko The problem was in the center of interest in the thirties and early forties, with AHLFORS, KAKUTANI, KOBAYASHI, P. MYRBERG, NEVANLINNA, SPEISER, TEICHMUELLER and others obtaining incisive specific results. The main problem of finding necessary and sufficient conditions remains, however, unsolved.
Toon meer Toon minder