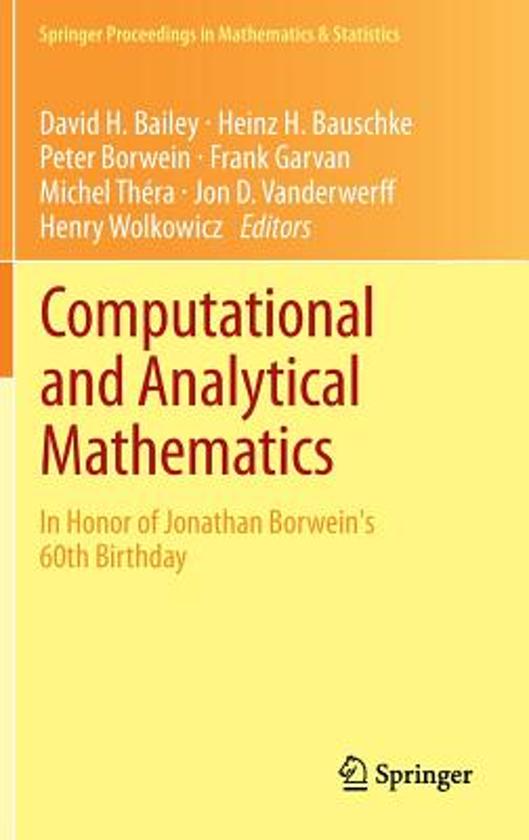 The research of Jonathan Borwein has had a profound impact on optimization, functional analysis, operations research, mathematical programming, number theory, and experimental mathematics. Having authored more than a dozen books and more than 300 publications, Jonathan Borwein is one of the most productive Canadian mathematicians ever. His research spans pure, applied, and computational mathematics as well as high performance computing, and continues to have an enormous impact: MathSciNet lists more than 2500 citations by more than 1250 authors, and Borwein is one of the 250 most cited mathematicians of the period 1980-1999. He has served the Canadian Mathematics Community through his presidency (2000-02) as well as his 15 years of editing the CMS book series. Jonathan Borwein's vision and initiative have been crucial in initiating and developing several institutions that provide support for researchers with a wide range of scientific interests. A few notable examples include the Centre for Experimental and Constructive Mathematics and the IRMACS Centre at Simon Fraser University, the Dalhousie Distributed Research Institute at Dalhousie University, the Western Canada Research Grid, and the Centre for Computer Assisted Research Mathematics and its Applications, University of Newcastle. The workshops that were held over the years in Dr. Borwein's honor attracted high-caliber scientists from a wide range of mathematical fields. This present volume is an outgrowth of the workshop on Computational and Analytical Mathematics' held in May 2011 in celebration of Dr. Borwein's 60th Birthday. The collection contains various state-of-the-art research manuscripts and surveys presenting contributions that have risen from the conference, and is an excellent opportunity to survey state-of-the-art research and discuss promising research directions and approaches.
Toon meer Toon minder