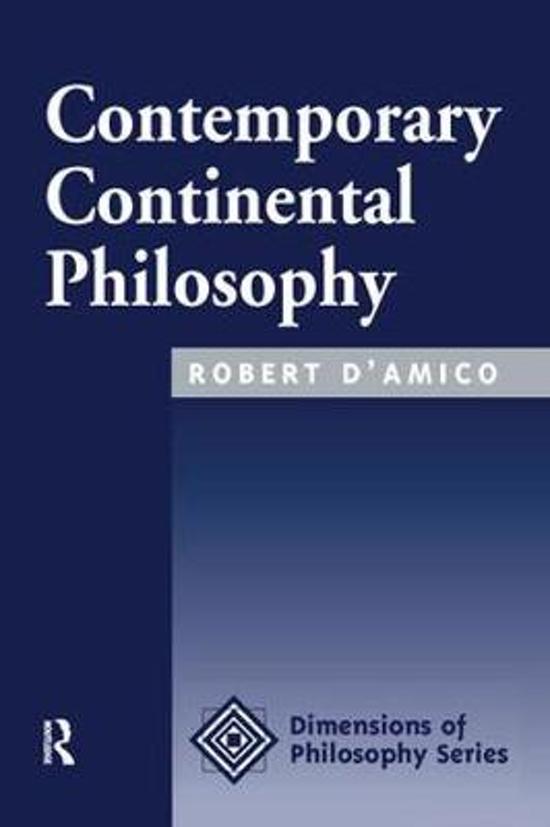 Contemporary Continental Philosophy steps back from current debates comparing Continental and analytic philosophy and carefully, yet critically outlines the tradition's main philosophical views on epistemology and ontology. Forgoing obscure paraphrases, D'Amico provides a detailed, clear account and assessment of the tradition from its founding by Husserl and Heidegger to its challenge by Derrida and Foucault. Though intended as a survey of this tradition throughout the twentieth century, this study's focus is on the philosophical problems which gave it birth and even now continue to shape it.The book reexamines Husserl as an early critic of epistemological naturalism whose grasp of the philosophical importance of the theory of meaning was largely ignored. Heidegger's contrasting effort to revive ontology is examined in terms of his distinction between ontic and ontological questions. In contrast with many earlier studies, the author outlines confusions engendered by the misappropriation of the distinct philosophical agendas of Husserl and Heidegger by such famous figures as Sartre and Merleau-Ponty. The book is also original in its emphasis on how social externalism in epistemology, inspired by Karl Mannheim, influenced this tradition's structuralist and Marxist phases. The philosophical defenses of a theory of interpretation by Gadamer and Habermas are closely examined and assessed and the study concludes with a a probing yet balanced account of Foucault and Derrida as critics of philosophical autonomy. The book concludes by reassessing this century-long divide between the analytic and Continental traditions and its implication for the future of philosophy.
Toon meer Toon minder