Dionysus in Late Antiquity. Clement of Alexandria and Nonnus of Panopolis in Dialogue 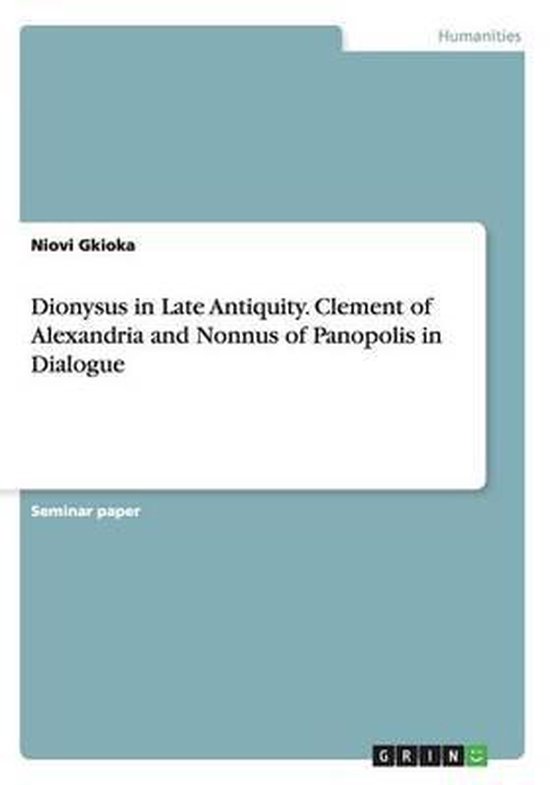 Seminar paper from the year 2015 in the subject Philosophy - Philosophy of the Ancient World, grade: 65, University College London (UCL), language: English, abstract: The early Christian writers, in constructing a worldview in continuation with the Old Testament, were inevitably faced with the challenge of the widespread Greek culture, and in particular of the Greek religion. Specifically, of all the Greek gods, the most vexing seems to have been Dionysus, who in striking parallel with Christ is a resurrected god - according to the Zagreus mythic tradition - has universal aspirations for his cult, was the offspring of a mortal mother and a god, performs miracles, and not least, has wine as a sacred element in his ritual observances. These analogies between Dionysus and Christ, which make their thematic comparison fitting, were first exploited by Paul in ca. 54 CE. In his epistles to Corinthians his language reflects Dionysian cults in places (1 Cor 12:2) and notably, the consumption of wine in private meetings is rendered in distinctively Dionysian phraseology (1 Cor 11:17-34). Similarly, as Richard Seaford has asserted, weighing in on the long-standing debate of the similarities between the Acts and the "Bacchae" first documented by Wilhelm Nestle in his 1900 article 'Anklange an Euripides in der Apostelgeschichte, ' the Acts and the Bacchae feature too many affinities, and at key points - Paul's conversion (Acts 9:3-7; 22:6-11; 26:12-18) and Paul and Silas' prison escape (Acts 16:19-40) - to be taken as mere coincidence. These very parallels between Dionysus and Christ were drawn more distinctively in the second and third century CE by Greek and Latin Apologists; that is Christian intellectuals who writing in defence of Christianity assumed a polemic stance against Dionysus."
Toon meer Toon minder