Disaster Response and Homeland Security What Works, What Doesn't 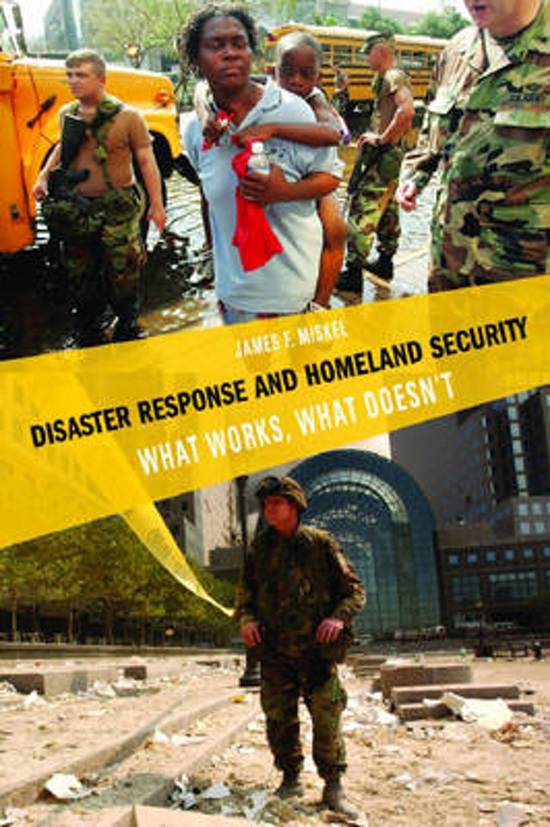 Hurricane Katrina is the latest in a series of major disasters that were not well managed, but it is not likely to be the last. Category 4 and category 5 hurricanes will, according to most predictions, become both more frequent and more intense in the future due to global warming and/or natural weather cycles. In addition, it is often said that another terrorist attack on the United States is inevitable; that it is a question of when, not whether. Add to that the scare over a possible avian flu pandemic. As a result, the United States should expect that disaster response-to natural and other types of disasters-will continue to be of vital concern to the American public and the policymakers and officials who deal with disaster response and relief, including the military. The U.S. disaster relief program reflects a basic division of responsibility between federal, state, and local governments that has generally stood the test of time. At the federal level, a single agency, FEMA-now under the Department of Homeland Security-has been charged with the responsibility for coordinating the activities of the various federal agencies that have a role in disaster relief. A successful disaster response requires three things: timely and effective coordination between state and federal governments; effective coordination among the federal agencies; and effective coordination between and among state and local government agencies. Miskel examines the effects that operational failures after Hurricanes Agnes, Hugo, Andrew, and Katrina have had on the organizational design and operating principles of the disaster response system program. He also discusses the impact of 9/11 and the evolving role of the military, and he identifies reforms that should be implemented to improve the nation's ability to respond in the future.
Toon meer Toon minder

[M]iskel, a former Deputy Assistant Associate Director of FEMA, examines the effects that operational failures after Hurricaines Agnes, Hugo, Andrews, and Katrina have had on the organizational design and operating principles of the disaster response system program. He also discusses the impact of 9/11 and the evolving role of the military, and he identifies reforms that should be implemented to improve the nation's ability to respond in the future. - Natural Hazards Observer The US government's failed response to the Hurricane Katrina disaster of 2005 fits into a pattern of failure to meet the needs of victims of catastrophic disasters, according to Miskel. This pattern points to systemic problems, rather than simply incompetence on the part of individual leaders systemic problems he seeks to uncover through comparative examination of how the government's disaster relief system operated during Hurricane Agnes in 1972, the Three Mile Island near-disaster in 1979, Hurricane Hugo in 1989, Hurricane Andrew in 1992, and Hurricane Katrina. After identifying the enduring structural issues revealed in these examples, he compares the US system to its Australian and Canadian counterparts and proposes some fundamental changes. - Reference & Research Book News
Toon meer Toon minder