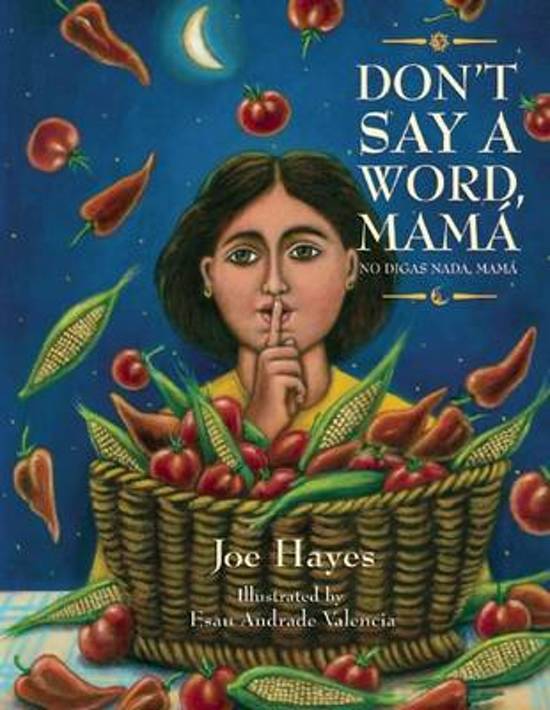 Mam says she has the best daughters in the world. The two women live near their mother--Rosa with her husband and children, Blanca by herself. They both have flourishing gardens. Rosa and Blanca are so generous and kind and thoughtful--well, everyone, including Mam , ends up with too much corn, tomatoes, and red hot chiles! It's crazy! It's also Joe Hayes at his finest, telling one of those stories young kids love, full of mishaps, surprise endings, and happy mommas! In fact, one seven-year old--after hearing Joe tell Don't Say a Word, Mama!--came home and told her mother, I heard a story today that I think changed my life! That's a pretty fantastic endorsement! 2014 Honor Book, Patterson Prize for Books for Young People Joe Hayes has been enchanting listeners and readers alike for over thirty years. His books have received many awards including two Land of Enchantment Children's Book Awards and an Aesop Accolade Award. His books have also been on the Texas Bluebonnet Award Master List three times. Ghost Fever won the Texas Bluebonnet Award for 2006-2007. Esau Andrade Valencia comes from a family of folk artists. He is increasingly being recognized as a master artist in the tradition of Diego Rivera and Rufino Tamayo. His paintings are included in the collection of The Museum of Latin American Art in Long Beach, California, as well as in the Downey Museum of Art in Downey, California.
Toon meer Toon minder

STARRED REVIEW. A sweet family tale that never turns saccharine Esau Andrade Valencia contributes highly saturated paintings that combine a folk aesthetic with magical realism This book overflows with affection and you can never have too much of that. Kirkus Reviews Hayes balances humor with sentiment, and abundance with a concern for privation in a way that imbues the notion of harvest with a sense of real value Perfect for readers of either language, or for language learners. The New York Times A funny, affectionate tale of two sisters who let their mother in on their secret gift-giving mission This bilingual tale of sisterly generosity by master storyteller Joe Hayes (Ghost Fever) brims with humor and love, while Esau Andrade Valencia's Mexican folk art matches the siblings' affection and playfulness Author and artist celebrate family and abundance in a story that will be a favorite read-aloud at harvest time or anytime. Shelf Awareness Children will enjoy the back and forth and will laugh at Mama's predicament Culturally relevant in its depiction of Latina characters, the book makes an excellent read-aloud to a broad audience. Hayes's many fans will enjoy this story as will those looking for tales about families and goodwill among siblings. School Library Journal A lushly illuminated bilingual original tale with a precious moral for all times, the value of sisters sharing of carefully harvested garden bounty and love a beautiful tale of sharing plenty that is exactly what the notion of thanksgiving is about. Midwest Book Review [Valencia's] brush presents tomatoes so tantalizing, corn so sweet, and chiles so peppery, as to make the taste buds salivate from memories of a perfect Sinaloan posole! Join Hayes and Valencia for this delicious fare that's both nourishing for the grumbling belly and the hungry soul. Book Dragon Visual beauty, humor, storyline, and a moral come together in this excellent book for kids. Molly Kincaid, Edible Baja Arizona
Toon meer Toon minder