Don't Sleep, There are Snakes Life and Language in the Amazonian Jungle 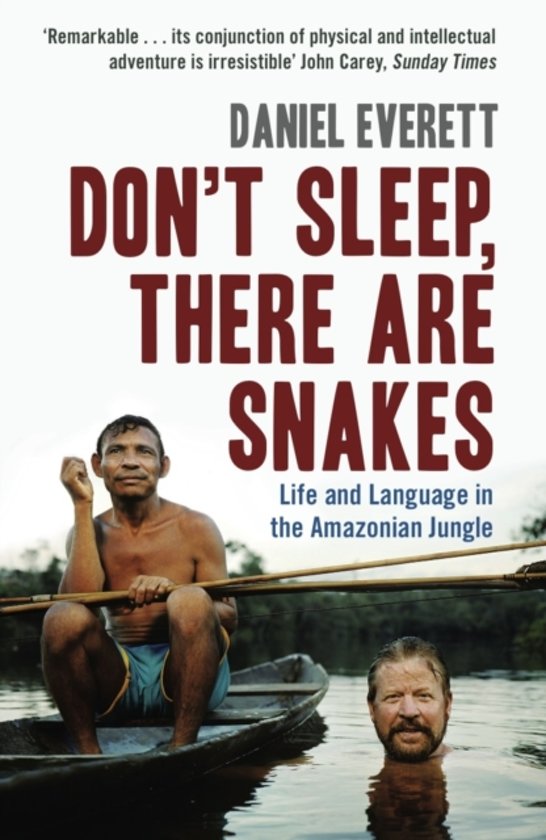 Although Daniel Everett was a missionary, far from converting the Pirahas, they converted him. He shows the slow, meticulous steps by which he gradually mastered their language and his gradual realisation that its unusual nature closely reflected its speakers' startlingly original perceptions of the world. He describes how he began to realise that his discoveries about the Piraha language opened up a new way of understanding how language works in our minds and in our lives, and that this way was utterly at odds with Noam Chomsky's universally accepted linguistic theories. The perils of passionate academic opposition were then swiftly conjoined to those of the Amazon in a debate whose outcome has yet to be won. Adventure, personal enlightenment and the makings of a scientific revolution proceed together in this vivid, funny and moving book.
Toon meer Toon minder

Dan Everett has written an excellent book. First, it is a very powerful autobiographical account of his stay with the Piraha in the jungles of the Amazon basin. Second, it is a brilliant piece of ethnographical description of life among the Piraha. And third, and perhaps most important in the long run, his data and his conclusions about the language of the Piraha run dead counter to the prevailing orthodoxy in linguistics. If he is right, he will permanently change our conception of human language -- John Searle, Slusser Professor of Philosophy, University of California, Berkeley Dan Everett is the most interesting man I have ever met. This story about his life among the Pirahas is a fascinating read. His observations and claims about the culture and language of the Pirahas are astounding. Whether or not all of his hypotheses turn out to be correct, Everett has forced many researchers to re-evaluate basic assumptions about the relationship among culture, language and cognition. I strongly recommend the book -- Edward Gibson, Professor of Cognitive Sciences, Massachusetts Institute of Technology A remarkable and often painful story of anthropological endeavour -- Caroline Sanderson * Bookseller * Astonishing... a warm tribute to this people's unique way of seeing the world... full of wonder while conveying the fragility of the Piraha way * Waterstone's Books Quarterly * Fascinating * Kirkus * Fascinating and candid * Publisher's Weekly * Unforgettable * Booklist * This is an astonishing book: a work of exploration, into the most distant place and language, but also a revelation of the way language is shaped by thought and circumstance -- Ben Macintyre * The Times * Rigorous -- Stuart Kelly * Scotland on Sunday * Destined to become a classic of popular enthnography -- David Papineau * Independent * [A] remarkable book. It is written with an immediacy even a Piraha might envy, and its conjunction of physical and intellectual adventure is irresistible -- John Carey * Sunday Times * A fascinating physical and intellectual adventure -- Giles Foden * Conde Nast Traveller * Everett writes simply and persuasively about language... A fascinating thesis... his courage and conviction should give linguists pause for thought -- Andrew Anthony * Observer * An extraordinary work of will and perseverance... A groundbreaking and beautifully realised study * Sunday Business Post * Irresistible account of a missionay's intriguing discoveries about language -- Must Reads * Sunday Times * Part Swiss Family Robinson, part Robinson Crusoe, it's one the greatest stories you'll ever read -- Tom Galvin * Evening Herald *
Toon meer Toon minder