Each Child Is My Only One Lotte Carlebach-Preuss, the Portrait of a Mother and Rabbi's Wife 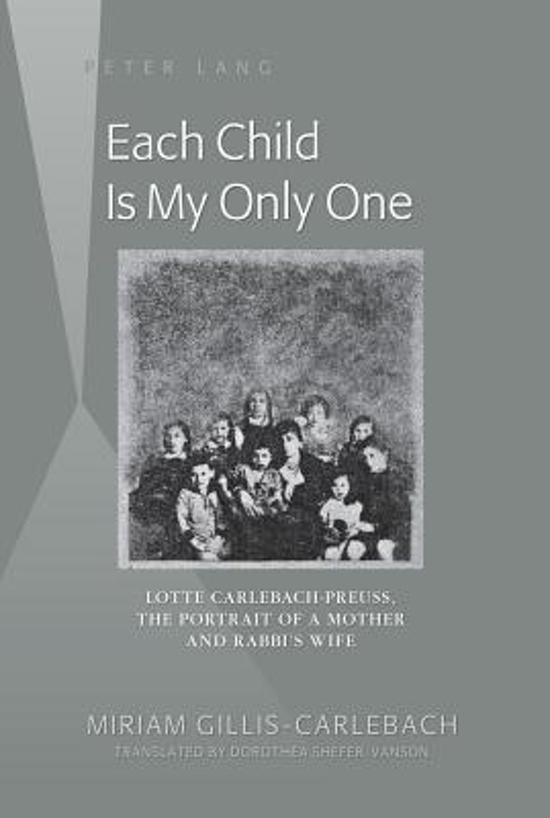 In Each Child Is My Only One: Lotte Carlebach-Preuss, the Portrait of a Mother and Rabbi's Wife, Miriam Gillis-Carlebach, the daughter of Rabbi Dr. Joseph Zvi Carlebach (1883-1942), last Chief Rabbi of Hamburg and its surroundings, describes her childhood in the lively household of a rabbi's family with nine children, focusing on the special personality of her mother, Lotte Carlebach, nee Preuss (1900-1942). The book starts with the history of the Preuss family, goes on to describe the marriage of Lotte to Joseph Carlebach, and portrays in detail their dynamic family life - until their deportation with their four youngest children to a Latvian concentration camp in 1942. The book is composed of two main parts. In the first section the reader learns about the events up to 1938, both inside and outside the Carlebach home; the second section covers the years 1938-1941, in which there was a lively correspondence mainly between the mother and those of her children who succeeded in emigrating from Nazi Germany. This part concludes with several testimonies portraying the special personalities of Rabbi Carlebach and his wife and their devotion to the unfortunate who benefited from their unbounded assistance and altruism during the Holocaust. Many photographs are included in the book, several of them taken by Lotte Carlebach herself. The book is a unique and personal testimony about Jewish life in Germany during the years of persecution that relentlessly led to the conflagration of the Holocaust.
Toon meer Toon minder

This is one of the most authentic, precise, inspiring, and lovingly written memoirs of a Jewish religious family during the darkest chapter of German Jewish history. (Dr. Peter Doelling, Hamburg) Each child is my only one,' said the mother of nine when bidding farewell to her daughter Miriam who, at the age of 16, emigrated from Hamburg to Palestine in 1938. They were never to see one another again. Miriam has long been renowned as a Carlebach scholar. Her remembrances and the accompanying documents create a fascinating, moving portrait of the rabbi's wife and the lifeworld of an orthodox Jewish family during the mounting oppression by Nazi terror - a memorial to humanity. (Professor Barbara Vogel, Hamburg)