East Asia Before the West Five Centuries of Trade and Tribute 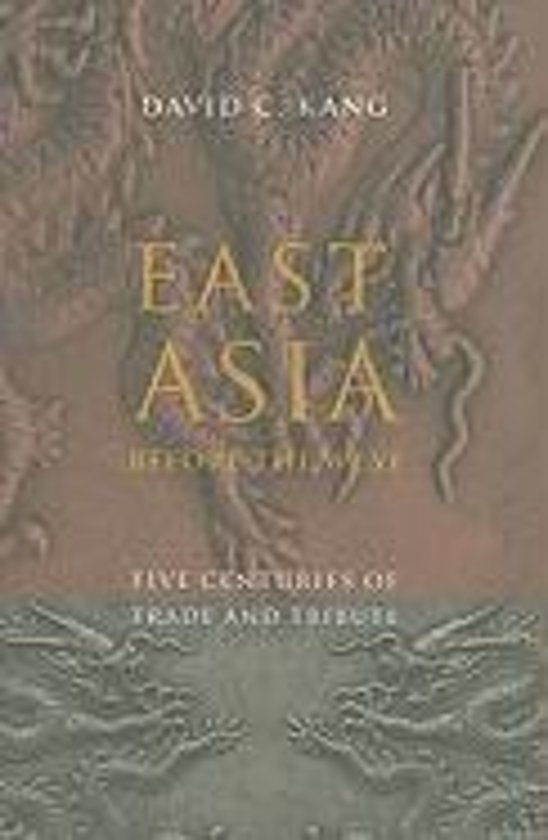 From the founding of the Ming dynasty in 1368 to the start of the Opium Wars in 1841, China has engaged in only two large-scale conflicts with its principal neighbors, Korea, Vietnam, and Japan. These four territorial and centralized states have otherwise fostered peaceful and long-lasting relationships with one another, and as they have grown more powerful, the atmosphere around them has stabilized.Focusing on the role of the tribute system in maintaining stability in East Asia and in fostering diplomatic and commercial exchange, Kang contrasts this history against the example of Europe and the East Asian states' skirmishes with nomadic peoples to the north and west. Although China has been the unquestioned hegemon in the region, with other political units always considered secondary, the tributary order entailed military, cultural, and economic dimensions that afforded its participants immense latitude. Europe's Westphalian system, on the other hand, was based on formal equality among states and balance-of-power politics, resulting in incessant interstate conflict. Scholars tend to view Europe's experience as universal, but Kang upends this tradition, emphasizing East Asia's formal hierarchy as an international system with its own history and character. This approach not only recasts our understanding of East Asian relations but also defines a model that applies to other hegemonies outside the European order.
Toon meer Toon minder

By researching the full range of China's relationships, including Southeast Asia, Korea, and Japan, as well as nomadic troubles, David C. Kang balances the perspective of the whole regional picture. A remarkable achievement. -- Brantly Womack, University of Virginia In a fascinating and deeply illuminating sequel to his acclaimed China Rising, David C. Kang challenges the Eurocentric bias of American and European theories of international relations. With apologies to Rudyard Kipling, Kang's main message is that 'East is East and West is West and sometimes the twain shall meet,' and he delivers it through smart arguments, great imagination, and compelling historical synthesis. All serious students of international relations, from both East and West, will have to come to terms with Kang's provocative arguments. -- Peter Katzenstein, Cornell University David C. Kang has written a concise, well-judged, and most useful analysis of the historical East Asian international system and its three principles of hierarchy, status, and hegemony. In so doing, he demolishes the American discourse of 'realism,' which assumes that all states on the planet behave in the same way. With a plethora of books on 'the rise of China,' Kang's study is also essential reading for understanding the formation of the East Asian system, its contemporary functioning, and the arc of its future. -- Bruce Cumings, University of Chicago, author of Dominion From Sea to Sea: Pacific Ascendancy and American Power Important in maintaining the ongoing discussion on whether or not there is something distinctive about interstate conduct in East Asia... immensely enjoyable and informative in its rich historical detail. -- Oliver Hensengerth International Affairs His study assuredly renews the debate on a contested topic in both East Asian and global history. Highly recommended. Choice This is a brilliant book, rare for a political scientists, and a must-read for experts and the general public alike. Survival Consistently intelligent... [East Asia Before the West] is one of the most stimulating books to appear in the past decade. -- Valerie Hansen H-Asia East Asia Before the West is an elegant mixture of political science and history.Global Asia -- John Delury Global Asia In his micro analysis, Kang has offered a provocative thesis, which will stimulate much analysis and discussion of traditional foreign relations in East Asia. -- Morris Rossabi Political Science Quarterly I recommend to anyone with a shaky grasp of East Asian history...quite a thoughtful book, and well worth your time -- Stephen M. Walt A Realist in an Ideological Age Foreign Policy Blog A reasonable and fluent book on a large topic of some significance. The Review of Korean Studies
Toon meer Toon minder