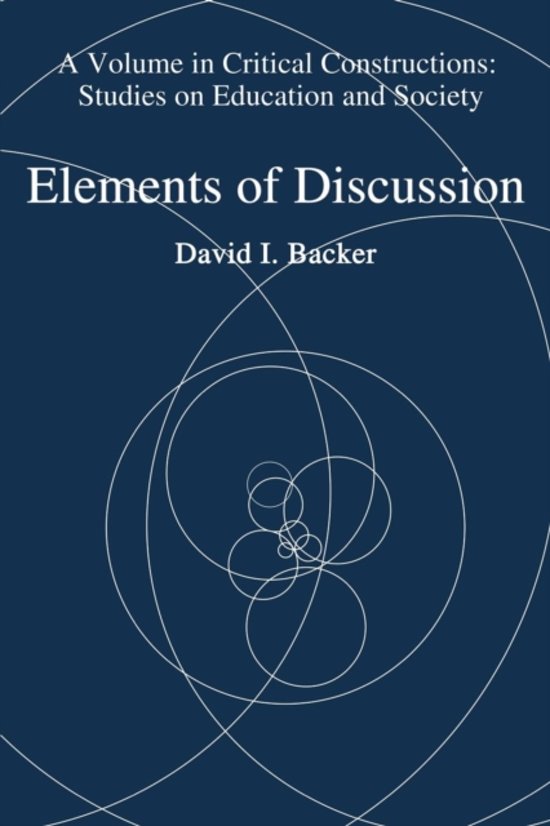 The Discussion is distorting today. Within schools, social movements, and firms, there has been an increasing tendency for teachers and facilitators to announce that there will be a discussion while the interaction which follows this announcement is not a discussion, but something else??likely a recitation and lecture. This distortion of discussion promises democracy, equality, and participation during a meeting or class, but delivers inequality, prohibition, and dominance. Now is the time to begin changing these practices which ultimately create and support a neoliberal society that promises democracy but practices oligarchy. One way to change this neoliberal social world is by intervening in the distortion of discussion, by facilitating interaction so that discussion's promise of equality and participation is fulfilled rather than negated. Elements of Discussion is a resource for this intervention. It is a political, poetic, and practical handbook for facilitating discussion. Discussions happen everywhere, and if society itself is composed of relationships between people then creating more participation and equality during discussions can help create the conditions for social change. Elements of Discussion therefore includes practical tips, techniques, and reflective questions through which it firmly and sensitively suggests to readers how to facilitate discussions across contexts. Beginning with the ways chairs and tables are set up, continuing through the kinds of questions a facilitator can ask, and including sample activities facilitators can use, the book expounds a philosophy of facilitating discussion, emphasizing the political and poetic significance of the tactics it recommends.
Toon meer Toon minder