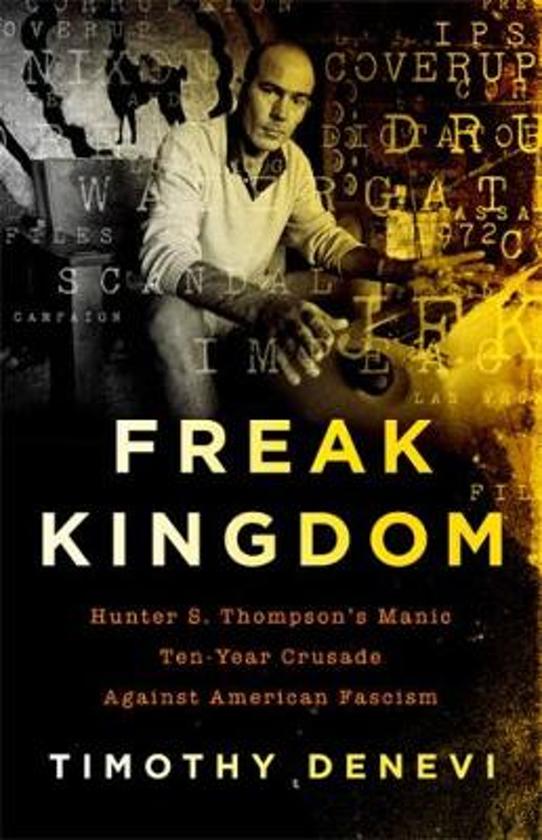 Hunter S. Thompson is best remembered today as a caricature: drug-addled, sharp-witted, and passionate; played with bowlegged aplomb by Johnny Depp; memorialized as a Doonesbury character. In all this entertainment, the true figure of Thompson has unfortunately been forgotten. In this perceptive, dramatic book, Tim Denevi recounts the moment when Thompson found his calling. As the Kennedy assassination and the turmoil of the 60s paved the way for Richard Nixon, Thompson greeted him with two very powerful emotions: fear and loathing. In his fevered effort to take down what he saw as a rising dictator, Thompson made a kind of Faustian bargain, taking the drugs he needed to meet newspaper deadlines and pushing himself beyond his natural limits. For ten years, he cast aside his old ambitions, troubled his family, and likely hastened his own decline, along the way producing some of the best political writing in our history. This remarkable biography reclaims Hunter Thompson for the enigmatic true believer he was: not a punchline or a cartoon character, but a fierce, colorful opponent of fascism in a country that suddenly seemed all too willing to accept it.
Toon meer Toon minder

Striking. --Washington Independent Review of Books What Mr. Denevi's book really does is drop the reader into a wholly disorienting hall of mirrors...Thompson comes across as a patriot and a family man in this fine book. -- Pittsburgh Post Gazette Denevi recovers Thompson as one of the key political essayists of our time...exhilarating.--Medium Beyond the drugs and gonzo journalism, Hunter S. Thompson was a fierce opponent of corruption and the authoritarian tendencies of political leaders. This is what most motivated his writing, Denevi argues in a new biography of the bombastic writer. -- The New York Times Book Review Denevi's creative decisions elevate Thompson's story and broaden our understanding of nonfiction along the way...Thompson created new styles of writing and Denevi does as well with this book. -- The Collagist Gripping...Denevi's Thompson is a tragic hero of the press...One can't help but wonder what he would do today. -- Diagram Timothy Denevi's insightful re-telling...reclaims the 'gonzo' journalist...presenting him as a daring, tortured patriot seeking to prevent national suicide. -- The Oregonian, a Best Book of the Year pick Not only powerful but moving. -- The Spectator What Thompson chronicled in his inimitable way during the Nixon era-'America acting on its worst impulses'-still resonates today. -- The Atlantic Timothy Denevi shines a long-overdue light the powerful idealism that underlies all of Hunter S. Thompson's best writing, and he proves us that Hunter's writing is just as relevant and important today as it was in the early 70s. This book is a must-read for anyone concerned about our current political situation, and shows why Hunter's books continue to inspire new generations of readers. --Juan F. Thompson, author of Stories I Tell Myself: Growing up with Hunter S. Thompson Based not on the Upper West Side or in West Hollywood but in Woody Creek, Colorado, Hunter S. Thompson got onto the page more of the 1960s and 1970s than any of his contemporaries. In this painstaking, exquisitely detailed, and impressively balanced book, Timothy Denevi conveys at what extraordinary cost to Thompson such herculean work was accomplished. If a writer doesn't aim to cause trouble, why even bother? --David Shields Hunter Thompson is back and very much alive in this sympathetic and sharply written 'best years of his life' bio. I loved it. --Terry Gilliam, director of Fear and Loathing in Las Vegas A spirited account...including 100 essential pages of notes containing samples of the journalist's work... Fans of Thompson, those unfamiliar with him, as well as journalists and scholars will enjoy this breezy but ultimately cautionary tale. --Library Journal Freak Kingdom moves this iconic figure from the Gonzo parody and arms him with a wife, a moral code and in some sense, an origin story. It's a wonderful though painful read for the Thompson admirer and historical enthusiast alike. --Leavenworth Times Sober and serious...lively and well-researched...Denevi writes in clean and unadorned prose. --Aspen Times By dramatizing the key decade in Thompson's life, Freak Kingdom brings his weird journey into clear and vivid focus. --TruthDig Denevi's writing does more than just bring the period alive, it makes one want to be there as if it were brand new...there has never been a Hunter S. Thompson biographer who has captured Thompson's work as well...Simply put, Freak Kingdom does justice to Hunter S. Thompson. --CounterPunch Freak Kingdom...sheds new light on Thompson's politically awakening and reporting -- and the toll it took on him and his later work and life. Few books this season will give you a stronger and more chilling sense of deja vu...The book chronicles, in absorbing day-by-day detail, how Thompson intersected with history more than some may recall. --Rolling Stone Surreal, astonishing, and at times deeply disturbing, Freak Kingdom is a welcome and timely revision to the popular hagiography of the larger-than-life Hunter S. Thompson depicted by popular culture. A necessary read for anyone who wishes to understand our current political moment. --Jennifer Percy, winner of the National Magazine Award and author of Demon Camp Timothy Denevi's Freak Kingdom is a high-octane and elegantly written study of Hunter S. Thompson's fatwah against fascism. The damn thing is alive with anarchistic and climactically redemptive Gonzo mischief. A fierce resistance fable for our troubled times! --Douglas Brinkley, Katherine Tsanoff Brown Chair in Humanities and Professor of History at Rice University, and author of Cronkite A thorough, timely, tautly written, and credible volume certain to be assigned by scores of journalism professors and a great new book for fans ready to move past Thompson's alter ego, Raoul Duke, to the next level. --Kirkus Reviews Scrupulously researched in a way that Thompson would admire... --LEO Weekly Given the state of America today, the true story of Thompson's life could not be more timely -- and just might inspire the next generation of fearless and ferocious voices. --WestWord Freak Kingdom...is one of the most important books of this election season. Despite the word 'Trump' not appearing in it once, it is somehow present on every page. --Mashable Terrifically redemptive....the first book about Thompson to be written during the Trump presidency...Denevi gives a charmingly sensational account of Thompson's life in order to prove his point that Thompson actually conducted himself as quite a serious person. --PopMatters Through meticulous research and recreated in novelistic detail, Denevi chronicles Thompson's scramble to create a viable career out of the instability of freelance writing...If you've ever felt Thompson a bit much to read on his own, Freak Kingdom makes a handy and stabilizing companion text: the behind-the-scenes details of how his big stories came together make it impossible to dismiss Thompson as the pop culture caricature he was later made out to be. --Salon Denevi...crafts his biography like a nonfiction novel, letting his research unfold in a captivating narrative that places readers at some of the most important episodes of Thompson's career. Denevi's work reminds us that the persistent concern about totalitarianism overwhelming free speech isn't something new. And 50 years ago, one journalist decided to do something about it. --The Associated Press
Toon meer Toon minder