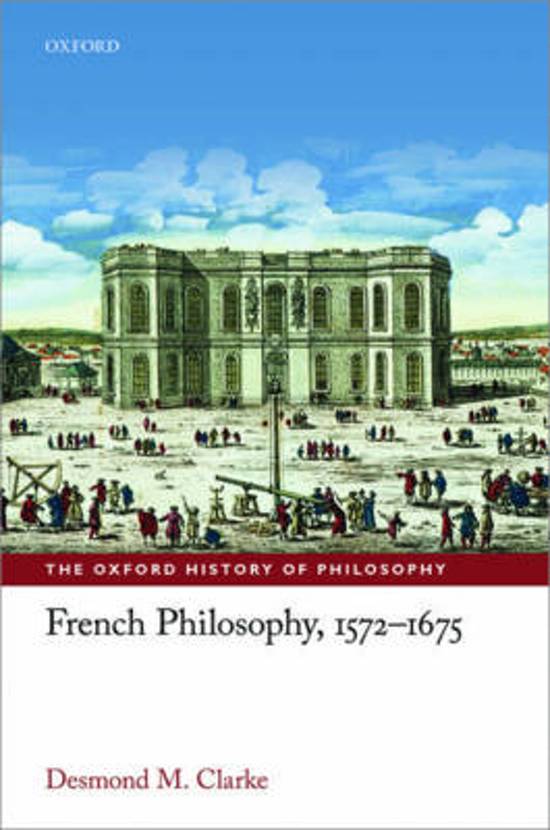 Desmond M. Clarke presents a thematic history of French philosophy from the middle of the sixteenth century to the beginning of Louis XIV's reign. While the traditional philosophy of the schools was taught throughout this period by authors who have faded into permanent obscurity, a whole generation of writers who were not professional philosophers-some of whom never even attended a school or college-addressed issues that were prominent in French public life. Clarke explores such topics as the novel political theory espoused by monarchomachs, such as Beze and Hotman, against Bodin's account of absolute sovereignty; the scepticism of Montaigne, Charron, and Sanches; the ethical discussions of Du Vair, Gassendi, and Pascal; innovations in natural philosophy that were inspired by Mersenne and Descartes and implemened by members of the Academie royale des sciences; theories of the human mind from Jean de Silhon to Cureau de la Chambre and Descartes; and the novel arguments in support of women's education and equality that were launched by De Gournay, Du Bosc, Van Schurman and Poulain de la Barre. The writers involved were lawyers, political leaders, theologians, and independent scholars and they acknowledged, almost unanimously, the authority of the Bible as a source of knowledge that was claimed to be more reliable than the fragile powers of human understanding. Since they could not agree, however, on which books of the Bible were canonical or how that should be understood, their discussions raised questions about faith and reason that mirrored those involved in the infamous Galileo affair.
Toon meer Toon minder

Clarke's book is a most useful account of a delimited portion of the history of philosophy. The work offers a broad exposition of large swatches of early modern French philosophy. To accomplish this task requires an author with a vast erudition and the command over an enormous quantity of disparate information, all of which were possessed by Clarke and are clearly on display throughout the work. * Roger Ariew, Notre Dame Philosophical Reviews * All in all, Clarke has produced a comprehensive, tough-minded, and thought provoking account of a key period in philosophical history. * Michael Moriarty, Journal of the History of Philosophy *