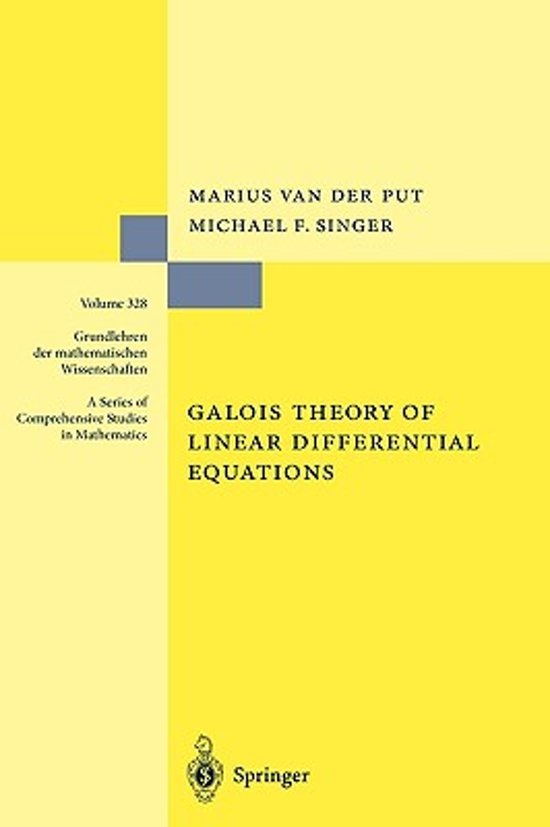 From the reviews: This is a great book, which will hopefully become a classic in the subject of differential Galois theory. [...] the specialist, as well as the novice, have long been missing an introductory book covering also specific and advanced research topics. This gap is filled by the volume under review, and more than satisfactorily. Mathematical Reviews

From the reviews: This book offers a detailed and thorough introduction to Galois Theory for differential fields and its applications to linear differential equations. (A. Cap, Monatshefte fur Mathematik, Vol. 145 (4), 2005) At last, a thorough exposition, including most of the facets it presents nowadays, of this beautiful analogue of the Galois theory of field extensions ... . The book is in fact already becoming a standard reference, not only for differential Galois theory proper, but also for the many areas which have accompanied its recent growth ... . Any ... student working in these areas will benefit from this book, which clearly belongs to all mathematical libraries. (D.Bertrand, Jahresberichte der Deutschen Mathematiker Vereinigung, Vol. 106 (4), 2004) This book, which is organized like a textbook with exercises ... is a definitive account of the Galois theory of linear differential equations. ... In sum, the book is a modern, comprehensive, and mostly self-contained account of the Galois theory of linear differential equations. It should be considered the standard reference in the field. (Andy R. Magid, Zentralblatt MATH, Vol. 1036 (11), 2004) This is a great book, which will hopefully become a classic in the subject of differential Galois theory. ... The book is carefully written: the authors have made a great effort to state the results in a language as common as possible, making use of specialized terminology only when strictly necessary. The material is introduced step by step and with a clear distinction of what is common knowledge' ... and what is specifically required'... . (Pedro Fortuny Ayuso, Mathematical Reviews, 2004 c) This book is an introduction to the algebraic, algorithmic and analytic aspects of Galois theory of homogenous linear differential equations. ... This book presents many of the recent results and approaches to this classical field. ... This book is comprehensively written and thorough ... . (Ernie Kalnin, New Zealand Mathematical Society Newsletter, Issue 90, April, 2004) The book is aimed to be an introduction into the theory and the authors attempted to make the subject accessible to anyone with a background in algebra and analysis ... . It contains many examples and exercises. Without any doubt, the book is devoted to a very interesting and useful topic and can be highly recommended. (J.Synnatzschke, Zeitschrift fur Analysis und ihre Anwendungen - ZAA, Vol. 22 (3), 2003)
Toon meer Toon minder