Growth against Democracy Savage Developmentalism in the Modern World 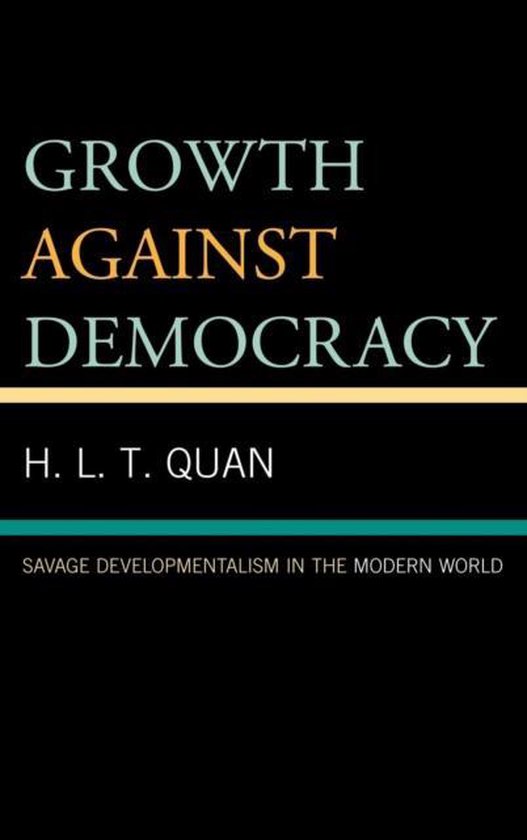 Growth against Democracy: Savage Developmentalism in the Modern World, by H.L.T. Quan is a compelling interrogation of the ways in which we have thought about modernity, capitalism, and democracy, and how those ideas inform neoliberal economics, diplomacy, and impact human life. To explicate contemporary theories of development, Quan introduces the concept of “savage developmentalism,” with its attendant distortions of the ideals of equality and freedom and assumptions that foment antidemocratic social and political forms. By outlining the pitfalls of security-obsessed developmental approaches,Growth against Democracy troubles the simple notion that modernity is inherently superior and development will benefit everyone. It shows how capitalists' needs for market, finance, and profitability often lead to development programs that engender expansionism, dispossession, and repression.

Drawing on political theory, international political economy, critical ethnic studies, legal studies, and feminist analytics, this groundbreaking study exemplifies how multi-disciplinary scholarship best addresses the increasingly complex and multi-layered issues facing humanity today. It analyzes the linkages between development and national security, and provides sustained attention to the making of foreign policy, the development of capitalism and corporate globalization. The book highlights three critical examples of where savage developmentalism has eventuated worse living conditions, severe social repression, and displacement: Brazilian-Japanese economic relations in Brazil under military rule (1964-1985); China’s aggressive courting of African good will and resources; and, the United States’ reconstruction of Iraq. These three major historical cases represent some of the most momentous global development in the last sixty years, and never before have such powerful cases been analyzed in the same monograph.Growth against Democracy helps re-evaluate the promises of progress, security, and freedom, and broadens our ideas about and priorities for humane public policy at the national and global levels.