History of the Reign of King Henry VII. with Notes by J. Rawson Lumby; 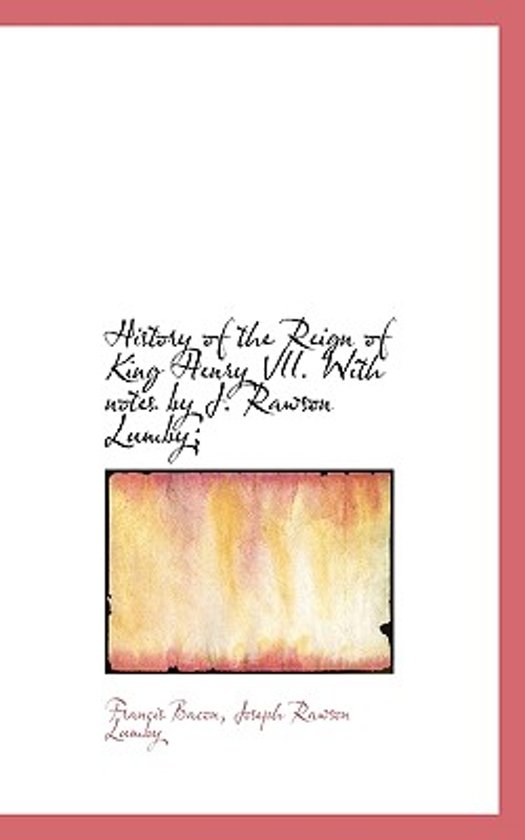 Francis Bacon, philosopher, essayist, lawyer and statesman, was born in London in 1561. He studied at Cambridge and was enrolled at Gray’s Inn in 1576. In 1584 he entered Parliament as the member for Melcombe Regis, subsequently representing other constituencies. Bacon made the acquaintance of the Earl of Essex, who endeavored to advance him in his career. Nevertheless, having been appointed to investigate the causes of Essex’s revolt in 1601, Bacon was largely responsible for the earl’s conviction. Bacon was appointed Solicitor-General in 1607 and was successively Attorney-General (1613), Lord Keeper (1617) and Lord Chancellor (1618). He was created Baron Verulam in 1618 and Viscount St. Albans in 1621. Later in that year he was charged with bribery and confessed that he had been guilty of ‘corruption and neglect’ but denied that he had ever perverted justice. He was deprived of the Great Seal, fined, imprisoned in the Tower and disabled from sitting in Parliament. Following his release, he retired to the family home at Gorhambury, Hertfordshire, and his remaining years were spent in literary and philosophical work. It was Bacon’s ambition to create a new system of philosophy to replace that of Aristotle, and he has been justly acclaimed as an inspiration to later scientists, rationalists and materialists. Of his philosophical works, the principal and best known are The Advancement of Learning, Novum Organum and De Augmentis. He also wrote several professional works including Maxims of the Law and Reading on the Statue of Uses. Of his literary writings the most important are the Essays (1597; issued in final form in 1625), De Sapientia Veterum, Apophthegms New and Old and a History of Henry VII. Francis Bacon died in 1626
Alles van Francis Bacon
Toon meer Toon minder