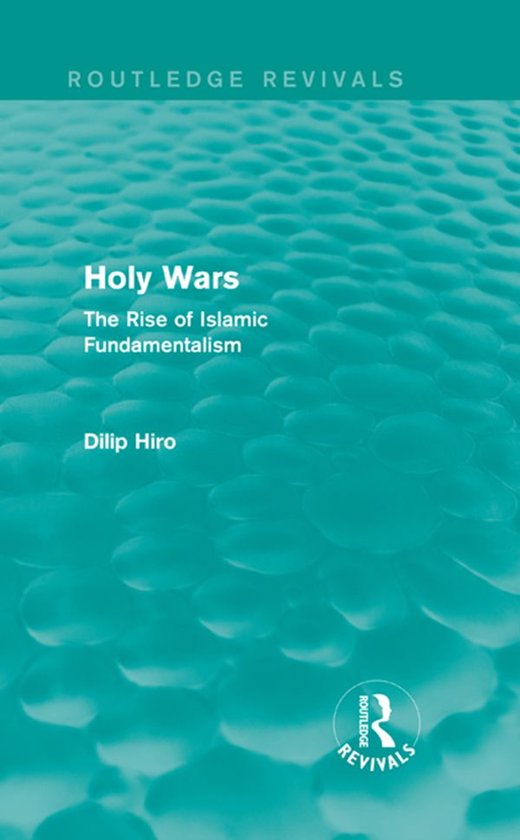 To some, Islamic Fundamentalism means the restoration of a true religion. To others, it is a politics that stands apart from capitalism and socialism. To many Westerners, it has come to constitute a threat to established order and international security. Holy Wars, first published in 1989, comprises a non-partisan narrative that takes account of both the socio-cultural values expressed in Fundamentalism, and its political consequences. Dilip Hiro's starting point is that fundamentalist forces have been active within Islam since the death of the Prophet Muhammad. He presents the two major sects, Sunnis and Shias, in this light. Hiro provides the background for an understanding of what was taking place in Middle Eastern countries such as Afghanistan, Libya, Egypt and Syria at the end of the 1980s. This is a comprehensive and readable work, of great relevance and value to those with an interest in Middle Eastern politics and history, and the growth of Islamic Fundamentalism.

Dilip Hiro does a good historian's job of placing fundemantalism in context... A well-researched chronicle of its subject and a valuable insight into the movement's impact - Marie Colvin, The Sunday Times Highly readable ....bridges the gap between academic works and daily newspaper reports ... It is both a beginner's guide and a highly intelligent wrap-up for the specialist - Ahmed Rashid, The Independent Dilip Hiro's splendidly lucid beginner's guide...brought up to date with an epilogue. Hiro criss-crosses first history,and then Saudi Arabia, Afghanistan and Iran for the origins of modern [Islamic] fundamentalism - Douglas Graham, The Guardian Does an excellent job of mapping out the territory of the subject... Mr Hiro is refreshingly practical - Graham Benton, The Middle East Mr Hiro's study is an excellent and non-paritsan analysis - George Joffe, Middle East International Well-written, comprehensive, informed and, most important, carefully balanced and objectively presented - James A. Bill, The Washington Post Eminently useful history and classification of the Moslem world - Kirkus Reviews This clearly written book is an excellent introduction to Islamic political assertiveness... Hiro is a master at description - Joseph A. Kechichian, Library Journal This book will be a welcome companion for those watching Islam's struggle for balance between authenticity and modernity, which now affects us all - Publishers Weekly
Toon meer Toon minder