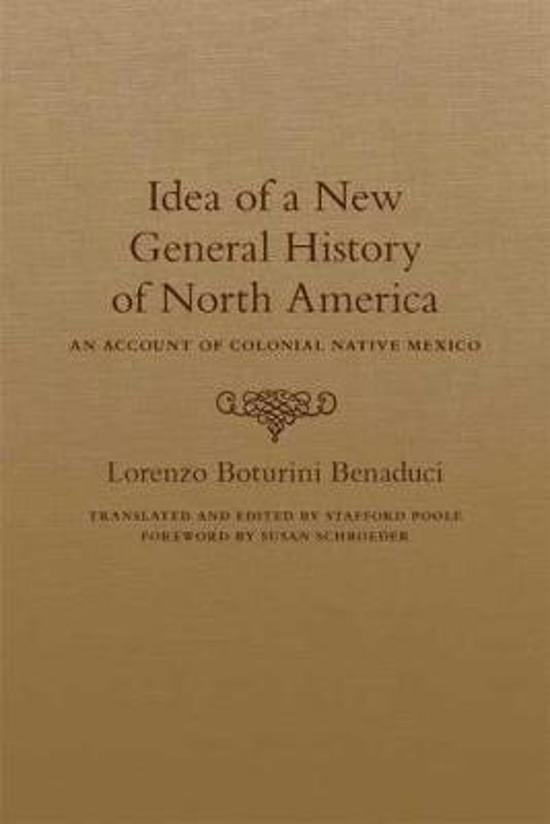 
A Spaniard originally from Italy, the polymath Lorenzo Boturini Benaduci (1702–1753), known as Boturini, traveled to New Spain in 1736. Becoming fascinated by the Mesoamerican cultures of the New World, he collected and copied native writings—and learned Nahuatl, the language in which most of these documents were written. Boturini's incomparable collection—confiscated, neglected, and dispersed after the Spanish crown condemned his intellectual pursuits—became the basis of his Idea of a New General History of North America. The volume, completed in 1746 and written almost entirely from memory, is presented here in English for the first time, along with the Catálogo, Boturini's annotated enumeration of the works he had gathered in New Spain.

Stafford Poole's lucid and nuanced translation of the Idea and Catálogo allows Anglophone readers to fully appreciate Boturini's unique accomplishment and his unparalleled and sympathetic knowledge of the native peoples of eighteenth-century Mexico. Poole's introduction puts Boturini's feat of memory and scholarship into historical context: Boturini was documenting the knowledge and skills of native Americans whom most Europeans were doing their utmost to denigrate. Through extensive, thoughtful annotations, Poole clarifies Boturini's references to Greco-Roman mythology, authors from classical antiquity, humanist works, ecclesiastical and legal sources, and terms in Nahuatl, Spanish, Latin, and Italian. In his notes to the Catálogo, he points readers to transcriptions and translations of the original materials in Boturini's archive that exist today.

Invaluable for the new light they shed on Mesoamerican language, knowledge, culture, and religious practices, the Idea of a New General History of North America and the Catálogo also offer a rare perspective on the intellectual practices and prejudices of the Bourbon era—and on one of the most curious and singular minds of the time.