IRS Whistleblower My 33 Years as an IRS Insider Will Show You the Secrets of How to Engage the IRS and Win. 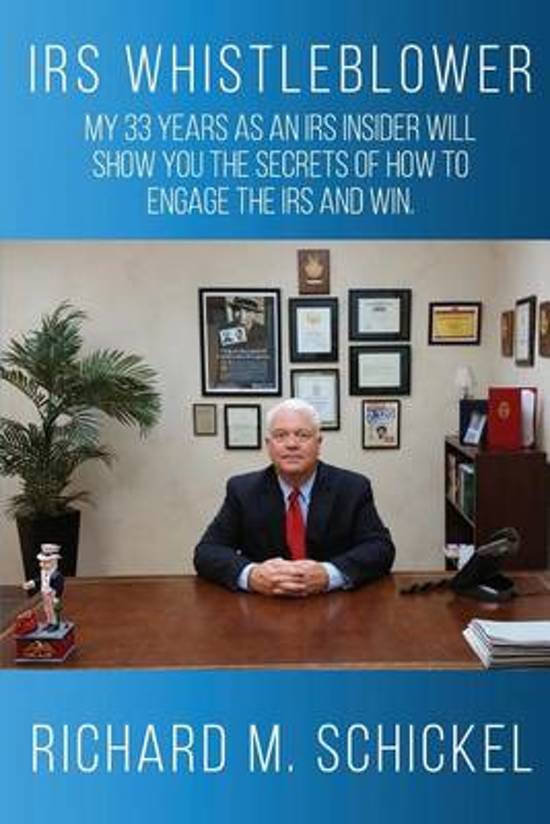 IRS Enforcer/Abuser Comes Clean and Shares Secrets that the IRS does not Want You to Know. This one-of-a-kind story about life inside the most reviled and hated agency in the U.S. Government will have you reeling. The Internal Revenue Service sends chills down most people's spines, and for good reason - every year they seize tens of millions of dollars in cash, wages, bank accounts, houses, businesses, and cars. Now a 33-year IRS veteran tax collector is ready to tell his story. Richard Schickel's memoir, IRS Whistleblower, shares the secrets that the IRS does not want you to know; about its culture, its procedures, and how they train their employees to think. It tells for the first time in print about the Social Security Loophole that allows people who have never paid for Social Security to receive benefits for life. The IRS is a fear machine - it hurts some of the people all of the time and some of the people none of the time. Between 16-20% of U. S. Citizens never file or correctly pay their share of income and other taxes. The IRS knows about this but instead of chasing them, it prefers to keep the W-2 wage earners in a box, tortured by a hot poker of fear, anger, and greed. This memoir will share how the IRS fosters a culture of unyielding power and abuse, mistreating taxpayers and non-taxpayers alike. In return, the public abuses the IRS by stealing at least $50 billion dollars out of the Treasury every year due to fraudulent claims and false refunds. Richard Schickel was a Senior Revenue Officer but also one of the abusers and enforcers who seized cash, wages, bank accounts, houses, businesses, and cars, sometimes destroying people's lives just to "teach taxpayers a lesson." He was also one of the abused when he exposed Anti-Semitism, racism, and sexual harassment in IRS case processing. In the last half of his career, Richard Schickel became the tax collector who cared, transforming into a person who knew the IRS system well enough to help his taxpayers. And now he wants to help you too This story is written with warmth, humor, and wisdom. Richard Schickel shares what he witnessed - the good, the bad, and the ugly. It will shock you, make you mad, and hopefully cause you to demand change in the IRS and Congress. This book is essential reading for anyone in trouble with the IRS. If you owe money or are being audited, or have been contacted by IRS Criminal Agents, read this book. It is an insider's guide to the IRS.
Toon meer Toon minder

Extra groot lettertype
Nee
NUR code
780
Subtitel
My 33 Years as an IRS Insider Will Show You the Secrets of How to Engage the IRS and Win.