Language and the Renewal of Society in Walt Whitman, Laura (Riding) Jackson, and Charles Olson The American Cratylus 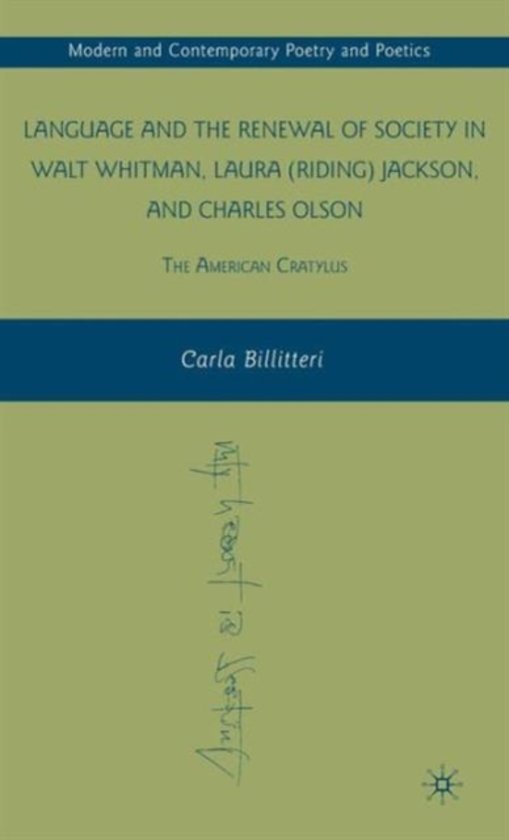 This book takes up the utopian desire for a perfect language of words that give direct expression to the real, known in Western thought as Cratylism, and its impact on the social visions and poetic projects of three of the most intellectually ambitious of American writers: Walt Whitman, Laura (Riding) Jackson, and Charles Olson.

Carla Billitteri s work expresses an abiding concern for what Laura (Riding) Jackson called truth telling. In this book, Billitteri brings to modern poetics an interest in reviving poetry s claims to authenticity, accuracy, truth-those old fashioned topics that are presumably among the grand narratives that postmodernism has successfully jettisoned.She comes to these issues with a formidable knowledge of western philosophy and language theory combined with a capacious understanding of modernist poetics, always testing claims for art s productive power against its relationship to the social and political. - Michael Davidson, University of California, San Diego Poetry has never been able to shake the nagging thought that maybe Cratylus was right after all: meaning resides in the material imminence of language. With lucidity, craft and perceptive distillation, Billitteri reads that skeptical legacy into the transcendentalist language of American literature and the modes of linguistic social utopias it has imagined again and again. Here we have an account of true poetry, in the Emersonian sense: not so much the language of things as the language of the ideas that things allow us to think. This is an immensely important topic; scholars and poets alike owe Billitteri thanks for taking it on. - Craig Dworkin, Professor of English, The University of Utah Focusing on three major poets, each of whom represent particular, large, and different problems for the reader and critic, Billitteri moves gracefully through American poetry since the mid-nineteenth century to the present, with one hand confidently on literary theory and the other oncultural history. The book is a serious contribution to the knowledge base and will enter a group of a perhaps a dozen books that define the central core of the American poetic tradition. - Don Byrd, Department of English, State University of New York at Albany
Toon meer Toon minder