Legends of the Dragonrealm 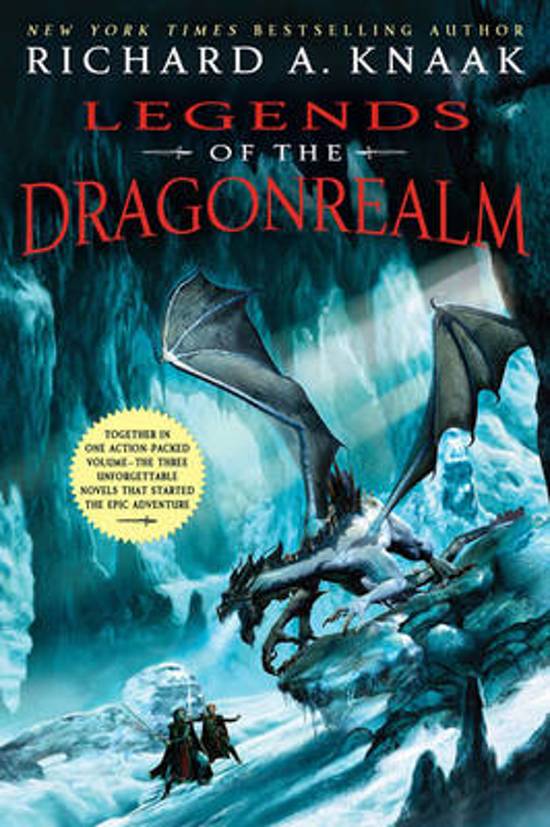 Richard A. Knaak was born in Chicago on May 28. Originally a chemistry major at the University of Illinois in Champaign-Urbana, he switched to Rhetoric, graduating with a Bachelor's Degree. He has been published since 1987 and his works have been translated into German, Italian, French, Danish, Japanese, Spanish, Polish, Finnish, Czech, Hungarian, Turkish, and Russian.

On the side, he enjoys reading, travel, food, and old movies.

Dragonrealm, is an ombinus of the first three novels in Richard A. Knaak's original fantasy series. FIREDRAKE: In the ultimate war between humans and fiery shape-shifting beings, Duke Toma has unleashed every conceivable evil upon the world of the Dragon Kings. Only one dares to challenge him: Cabe Bedlam, a youth cast adrift in a world where none can be trusted. Yet at his command us a formidable arsenal...a fierce warrior tradition imparted by his regal forebears...the fabulous gifts of the witch Gwen, the lady of the Amber...and the magical Horned Blade, the sword that promises its bearer total mastery over man and beast alike. ICEDRAGON: Pitting his magic sword against the glittering scaled armor of the Dragon Kings, young Cabe Bedlam has driven the shape-shifters back into their home realms. But from the Northern Wastes, the merciless Ice Dragon unleashes the Final Winter, implementing a lethal scheme to conquer all the Dragonrealms and sweep mankind into oblivion. Now Cabe must embark on a perilous journey toward an epic confrontation. WOLFHELM: The Death of the Dragon Emperor leaves behind a wicked legacy: the Dragonrealms and human kingdoms both lie in ruins. Tomorrow's hope--the Emperor's hatchlings--live , protected by the human warrior Cabe Bedlam. But the future teeters on the brink of disaster, and only Cabe's good friend, the Gryohon, can save the dragons from losing their magic forever.
Toon meer Toon minder

Endlessly inventive. Knaak's ideas just keep on coming! -- Glen Cook, author of Chronicles of the Black Company Full of energy.... Great world building [and] memorable characters.... It's easy to see why Richard has enjoyed so much success! -- R. A. Salvatore