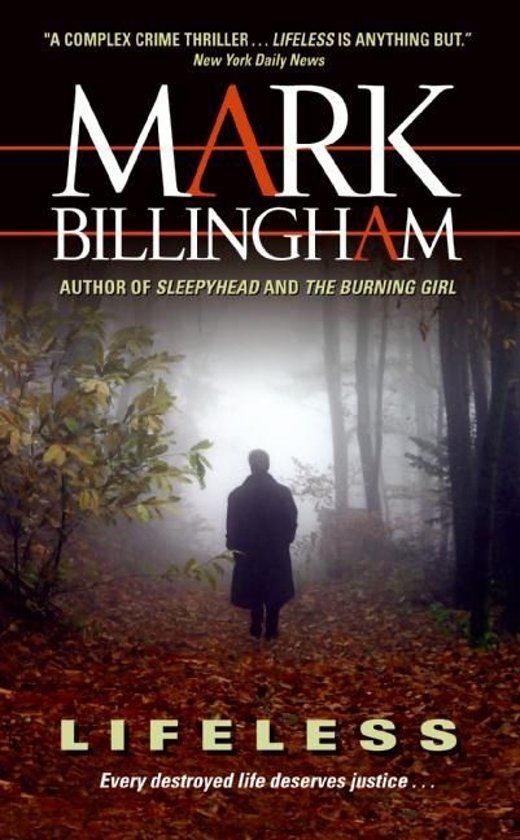 To find a vicious killer of three homeless men, Detective Inspector Tom Thorne must go undercover and enter a dark and disturbing world with its own rules, its own hierarchy, and plenty of secrets. HC: William Morrow.

'Complex, thought-provoking and, in parts, very funny ... a tour de force' OBSERVER 'Murder and mystery do not come better than this.' WHAT'S ON IN LONDON 'Assured and shocking thriller.' GUARDIAN 'A cunning variation on the serial-murder theme.' SUNDAY TELEGRAPH 'Scary, pell-mell, cliff-hanging thriller.' LITERARY REVIEW 'Well worth reading.' MAIL ON SUNDAY 'This is a self-assured and thought-provoking thriller.' DAILY EXPRESS 'LIFELESS is a cracking read.' IRISH EXAMINER 'The structure of LIFELESS allows Billingham to take both his protagonist and the reader into a truly dark universe.' CRIME TIME 'Billingham's prose is as masterfully constructed as one of his routines, cannily obscuring revelations to ensure maximum effect,' GQ 'A great book.' LADS MAG 'The fifth in the DI Tom Thorne series is the best yet and a riveting, if unsettling, holiday read.' ARENA 'In Lifeless, Mark Billingham's Tom Thorne reaches something like the nadir of his police career, broken by the death--possibly the murder--of his demented father and shuffled off to a desk job of infinite tedium. When someone starts kicking the London homeless to death, he suggests going undercover, and those of his friends who care about him worry that he is looking for his own destruction as much as for the killer. Certainly Thorne finds compensations on the street for danger, cold, hunger and squalor--his friendship with two young addicts is nonetheless real for his deceit and their pragmatic ruthlessness. Yet the secret of the deaths he is investigating lies only partly in London's dark alleys and corners; it lies as well fourteen years in the past on the road to Baghdad... This is probably Billingham's best thriller yet--inventive and passionate and full of commitment and dark humour. In his vulnerability and shrewdness, Tom Thorne is gradually shaping up into a classic detective whose habit of breaking the rules is not so much a strength as part of a pattern of self-destructive behaviour. Billingham's writing gets better with each book, too--the rough tenderness for each other of Spike and Caz, Thorne's mildly deranged guides to the street, is delicate and moving.' - Roz Kaveney, AMAZON.CO.UK REVIEW
Toon meer Toon minder