Masquerade and Postsocialism Ritual and Cultural Dispossession in Bulgaria 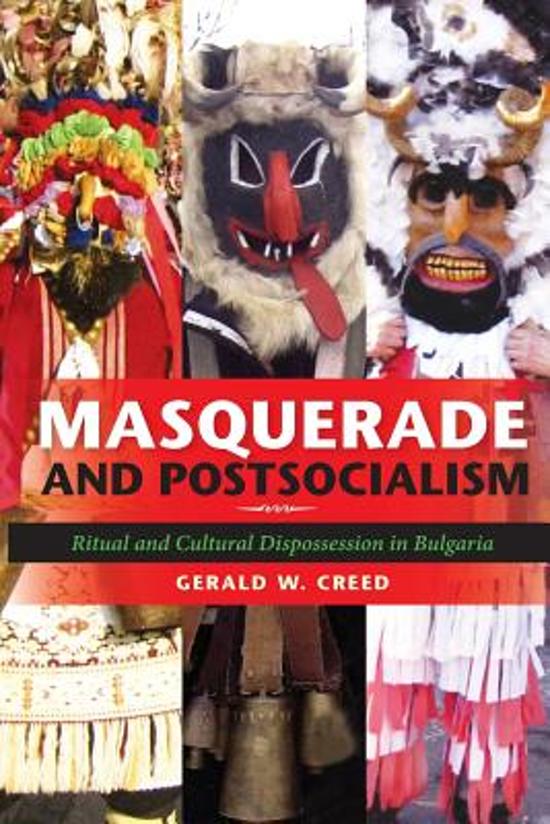 Gerald W. Creed analyzes contemporary mumming rituals in rural Bulgaria for what they reveal about life after socialism-and the current state of postsocialist studies. Mumming rituals have flourished in the post-Soviet era. Elaborately costumed dancers go from house to house demanding sustenance and bestowing blessings. Through the analysis of these rites, Creed critiques key themes in postsocialist studies, including understandings of civil society and democracy, gender and sexuality, autonomy and community, and ethnicity and nationalism. He argues that these events reveal indigenous cultural resources that could have been used both practically and intellectually to ease the postsocialist reconstruction of Bulgarian society, but were not.

Gerald Creed has produced an unusually perceptive account of the cultural dynamics of post-Communist development in Bulgaria. His efforts not only illuminate the patterns and practices of Postsocialism, but his investigation also endeavors to radically alter the dominant frameworks within which debates on East European transitions tend to be positioned. * SLAVIC AND EAST EUROPEAN JOURNAL * Masquerade and Postsocialism was an exhilarating read that offered much inspiration on the relevance of anthropological insights into larger social problems and critique of hegemonic models for political and economic reforms. Clearly and accessibly written, I [Yuson Jung] strongly recommend this book for both introductory and advanced level courses * American Ethnologist * Masquerade and Postsocialism is a valuable book for the general eloquence of its arguments, its solid engagement with ritual as well as its discussion of broader ideological frameworks of postsocialism, nationalism and modernity. It is a theoretically rich work, ethnographically thorough and thought provoking. * Social Anthropology * [A]n empirically rich and theoretically sophisticated analysis of the postsocialist condition in rural Bulgaria. * Anthropos * [A] brilliant scholar's masterpiece. * AMERICAN ANTHROPOLOGIST * Masquerade and Postsocialism is written with great sympathy for the people it describes and bears the marks of a work matured by decades of fieldwork. * Jrnl Royal Anthropological Inst JRAI * Masquerade represents an important theoretical and rich ethnographic contribution to studies of postsocialist Eastern Europe with far-reaching import and application for folklorists, anthropologists, and other scholars whose work is located at the intersection of culture, postcolonialism, and postsocialism.Jan 2014 * Journal of Folklore Research * Masquerade and Postsocialism would be of interest to anyone in globalization or development studies, as well as European studies. Creed's emphasis on the role of ritual and performance broadens the audience. . . Creed demonstrates that ritual, a long-standing topic of anthropology, not only serves as a useful site of analysis but can also challenge teleological ideals of Western modernity. Fall 2012 * ANTHROPOLOGY E EUROPE REVIEW * Gerald W. Creed's Masquerade and Postsocialism is a masterful analysis of key social themes as gender and sexuality, civil society and democracy, community and ethnicity. The book provides a vivid analysis of a ritual performance as a source of meaningful knowledge about people's lives. * Journal of American Folklore * Creed's book is both ethnographically rich and theoretically significant. Moreover, it is a deeply humane book, an homage to the resilience and resourcefulness of the Bulgarian peasants whom Creed has made it his life's work to understand. Accessible to a broad audience, it is must reading for anyone interested in the costs of the 'revolutions' of 1989. * Slavic Review *
Toon meer Toon minder