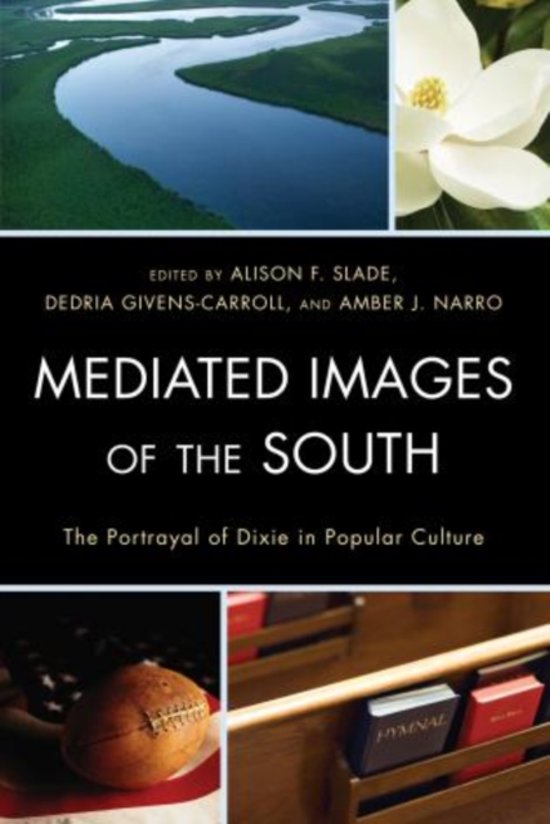 Mediated Images of the South: The Portrayal of Dixie in Popular Culture, edited by Alison F. Slade, Dedria Givens-Carroll and Amber J. Narro, is an anthology that explores the impact of the image of the Southerner within mass communication and popular culture. The contributors offer a contemporary analysis of the Southerner in the media. In most cases, previous literature situates these media images in the past, most notably through historic analyses of the Southerner during the Civil Rights movement. Mediated Images of the South breaks out of the box of the 1960s and 1970s by including the most recent and contemporary cultural examples of the Southerner. This book represents a long overdue analysis of those images, from both the past and the present. In addition, the discussions are not limited to one genre of media, but provide the reader with an opportunity to see how far-reaching the myth of the Southerner and the Southern image is in American society. While there is a long list of successful southern politicians, historical figures, businessmen and women, actors and actresses, sports figures and other national and world leaders, Slade, Givens-Carroll, and Narro find that there is still work to be done to present southerners as capable and educated.
Toon meer Toon minder

There has been a recent trend in scholarly studies to assess how popular media have depicted the South. Karen Cox's Dreaming of Dixie: How the South Was Created in American Popular Culture (CH, Jan'12, 49-2870), for example, examines the ways in which southern stereotypes, largely generated by northern advertising and entertainment corporations, influenced the way the entire nation perceived the South in the 20th century. Communications scholars Slade, Givens-Carroll, and Narro gather essays on topics as diverse as the influence of hip-hop on southern black men, the historical use of traditional southern emblems in promoting Mississippi tourism, and the Blue Collar Comedy Tour's representation of redneck culture. As such, this book goes beyond historical interpretations only. Including essays addressing representations of southern culture from the recent past along with essays focusing on how current media depict the South, the editors attempt, as the introduction states, to explore and understand the impact of the image of the Southerner within mass communication and popular culture. Most of the nine essays are relatively brief, averaging only 18 pages, including bibliographical notes. The introduction is a slight four pages. Summing Up: Recommended. * CHOICE * In the ambitious and sprawling collection of essays that make up Mediated Images of the South, the reader encounters a colorful, historical, and even whimsical region....Mediated Images of the South is a notable and valuable resource for those interested in the popular texts that help to define a community, state, region, or nation. * Journalism & Mass Communication Quarterly * As a Southerner, I have long decried the negative stereotypes of Southerners in the media. It's about time media scholarship caught up with this last acceptable form of media bias. As a communication scholar, I applaud this book's range and depth of analysis. -- Carol Madere, Southeastern Louisiana University
Toon meer Toon minder