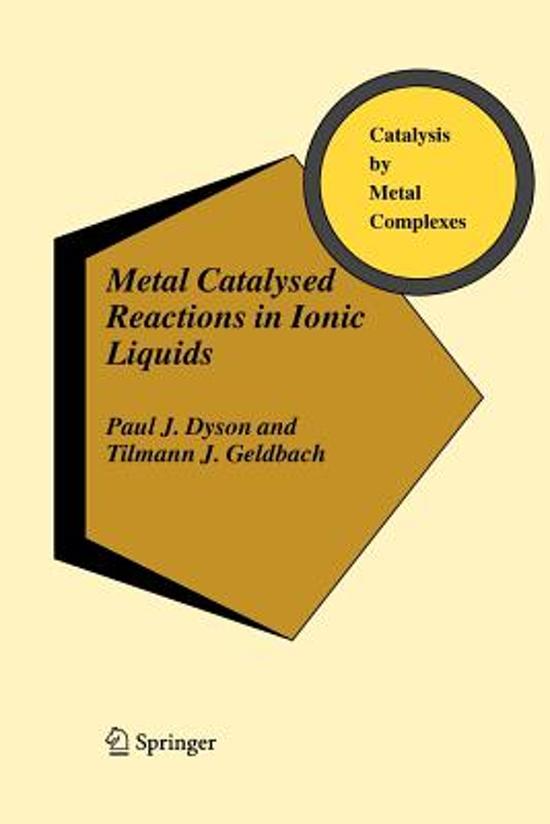 Metal Catalysed Reactions in Ionic Liquids is the first non-edited book on the subject of metal catalyzed reactions in ionic liquids to cover the literature from its origins until early 2005. Following a general introduction to the field of biphasic/multiphasic catalysis, the book moves on to describe the synthesis, the functionalisation, and fundamental properties of ionic liquids relevant to catalysis. It then analyses the catalysed reactions according to their type, encompassing hydrogenation, hydroformylation, oxidation, C-C coupling reactions, metathesis, dimerisation, polymerisation and more. Trends, generalisations, advantages and disadvantages of ionic liquids for specific reaction types are also examined as well as specific processes such as supported ionic liquid phase catalysis, continuous processes using CO2 extraction and nanoparticle catalysis. Metal Catalysed Reactions in Ionic Liquids is of interest to those working in catalysis/green chemistry, in particular to advanced level undergraduate and graduate students and researchers in bi- or multiphasic catalysis using ionic liquids.
Toon meer Toon minder

From the reviews: This book is easy to read and explains the physical and chemical properties of ionic solvents in great detail ... . is suitable either for specialists from each of these areas or for students, since the fundamentals of both ionic liquids and metal-catalyzed reactions are covered in sufficient depth. The explanations are easy to understand ... . this monograph offers both students and researchers an eminently readable and concise overview that makes the key fundamentals of metal catalysed reactions in ionic liquids' accessible ... . (www.organic-chemistry.org, June, 2006) This volume is the 29th in the well-received series Catalysis by Metal Complexes published by Springer. ... The figures and tables presented throughout the text are clear, accurate, and germane to the discussion. ... the volume is well written and organized. ... would be an excellent choice of text for a graduate course on alternative solvents and is a must read for anyone in or thinking of entering the field ... . I know it will remain within close reach on my bookshelf. (Brian J. Frost, Journal of the American Chemical Society, Vol. 128 (21), 2006)
Toon meer Toon minder