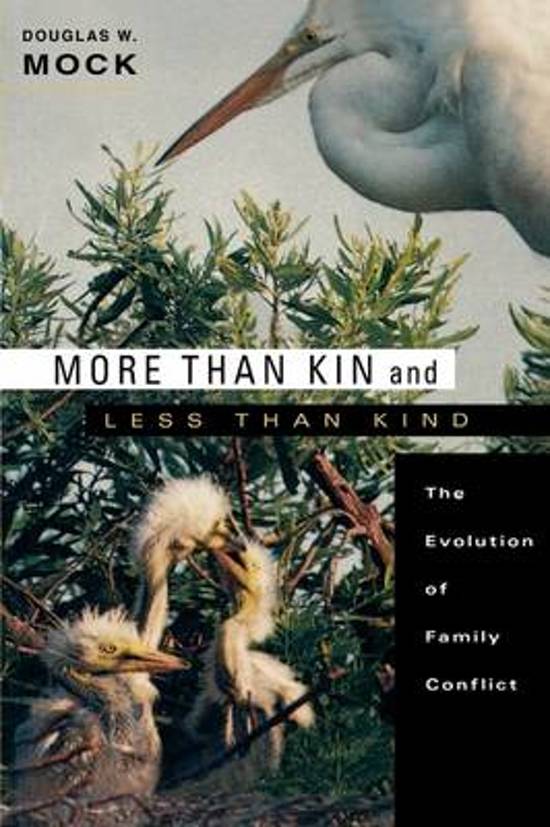 Sibling rivalry and intergenerational conflict are not limited to human beings. Among seals and piglets, storks and burying beetles, in bird nests and beehives, from apples to humans, family conflicts can be deadly serious, determining who will survive and who will perish. When offspring compete for scarce resources, sibling rivalry kicks in automatically. Parents sometime play favorites or even kill their young. In More than Kin and Less than Kind, Douglas Mock tells us what scientists have discovered about this disturbing side of family dynamics in the natural world. Natural selection operates primarily for the benefit of individuals (and their genes). Thus a family member may profit directly, by producing its own offspring, or indirectly, by helping close kin to reproduce. Much of the biology of family behavior rests on a simple mathematical relationship called Hamilton's rule, which links the benefits and costs of seemingly altruistic or selfish behavior to the degree of relatedness between individuals. Blending natural history and theoretical biology, Mock shows how Hamilton's rule illuminates the study of family strife by throwing a spotlight on the two powerful forces-cooperation and competition-that shape all interaction in the family arena. In More than Kin and Less than Kind, he offers a rare perspective on the family as testing ground for the evolutionary limits of selfishness. When budgets are tight, close kin are often deadly rivals.
Toon meer Toon minder

Mock has a lively and engaging style, and the skill to explain complex ideas from kin selection and related fields intelligibly without being patronizing...[He] has done a superb job in bringing a large area of contemporary behavioural ecology to both a biological and a general audience...It deserves to be read by everyone interested in the evolution of family life. - Charles Godfray, Nature Mock's engaging volume assimilates the vast literature on altruism but concentrates on the more traditional analysis of conflict... Mock's is one of those sought after books in science, a work of popularization and a thoughtful synthesis of an important discipline. - W. F. Bynum, Times Higher Education Supplement

Originele Titel
More Than Kin and Less Than Kind: The Evolution of Family Conflict