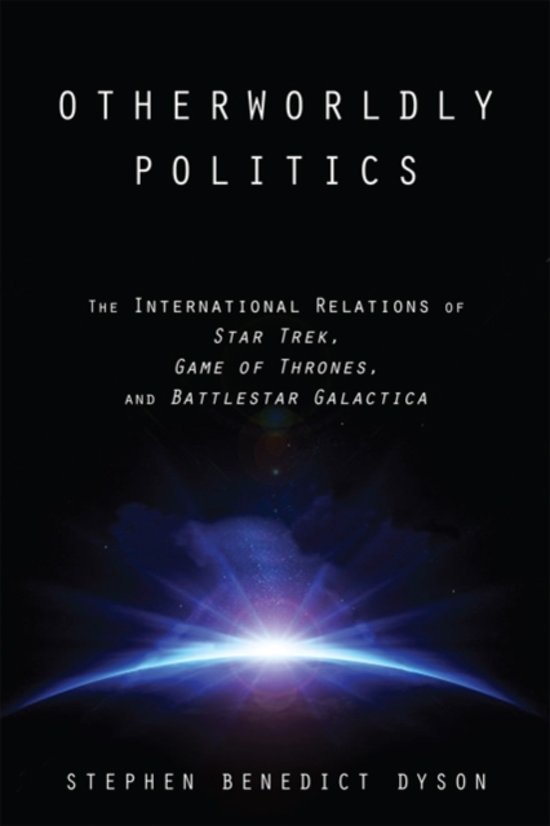 In Otherworldly Politics, Stephen Benedict Dyson examines the fictional but deeply political realities of three television shows: Star Trek, Game of Thrones, and Battlestar Galactica. Dyson explains how these shows offer alternative histories and future possibilities for humanity. Fascinated by politics and history, science fiction and fantasy screenwriters and showrunners suffuse their scripts with real-world ideas of empire, war, civilization, and culture, lending episodes a compelling intricacy and contemporary resonance. Dyson argues that science fiction and fantasy television creators share a fundamental kinship with great minds in international relations. Screenwriters like Gene Roddenberry, George R. R. Martin, and Ronald D. Moore are world-builders of no lesser creativity, Dyson argues, than theorists such as Woodrow Wilson, Kenneth Waltz, and Alexander Wendt. Each of these thinkers imagines a realm, specifies the rules of its operation, and by so doing shows us something about ourselves and how we interact with one another. Combining intellectual and real-world history with lucid theoretical analysis, the book is a vital challenge to scholars and a spur to creative thinking for fans of these three influential shows.
Toon meer Toon minder

... Otherworldly Politics is undeniably one of the most lively and ebullient books on IR theory on the market today. Its premise-that televised genre fiction can reveal truths about international relations just as easily as it does about character and plot-is well founded and expertly elaborated by Dyson's spritely prose. * H-Net Reviews *