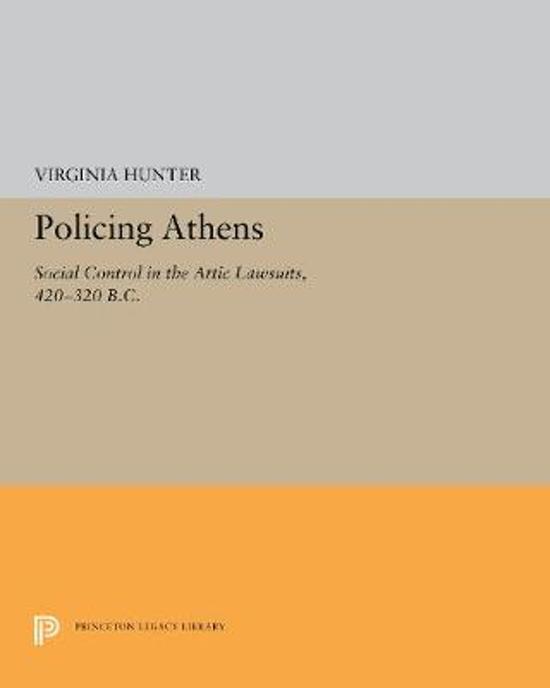 From household gossip to public beatings, this social history explores the many channels through which Athenian maintained public order. Virginia Hunter draws mostly on Attic court proceedings, which allowed for a wide range of evidence, including common rumors about a defendant's character and testimony, obtained under torture, of slaves against their masters. She describes Athenian policing as a form of social control that took place across a range of private and public levels. Not only does policing appear to have a collective enterprise, but its methods were embedded in a variety of social institutions, resulting in the blurring of the line between state and society. Hunter's inquiry into topics such as household authority, disputes among kin, the presence of slaves in the house, gossip in the home and neighborhood, and forms of public punishment reveals a continuum extending from self-regulation among kn and punititve actions enforced by the state. Recognizing the bias of legal documents toward the wealthy, Hunter concentrates on exposing the voices of the less powerful and less privileged members of society, including women and slaves. In so doing she is among the first to address systematically such important issues as the authority of women, self-help, and corporal punishment. Virginia J. Hunter is Professor of History at York University. She is author of Past and Process in Herodotus and Thucydides (Princeton) and Thucydides, the Artful Reporter (Toronto). Originally published in 1994. The Princeton Legacy Library uses the latest print-on-demand technology to again make available previously out-of-print books from the distinguished backlist of Princeton University Press. These editions preserve the original texts of these important books while presenting them in durable paperback and hardcover editions. The goal of the Princeton Legacy Library is to vastly increase access to the rich scholarly heritage found in the thousands of books published by Princeton University Press since its founding in 1905.
Toon meer Toon minder