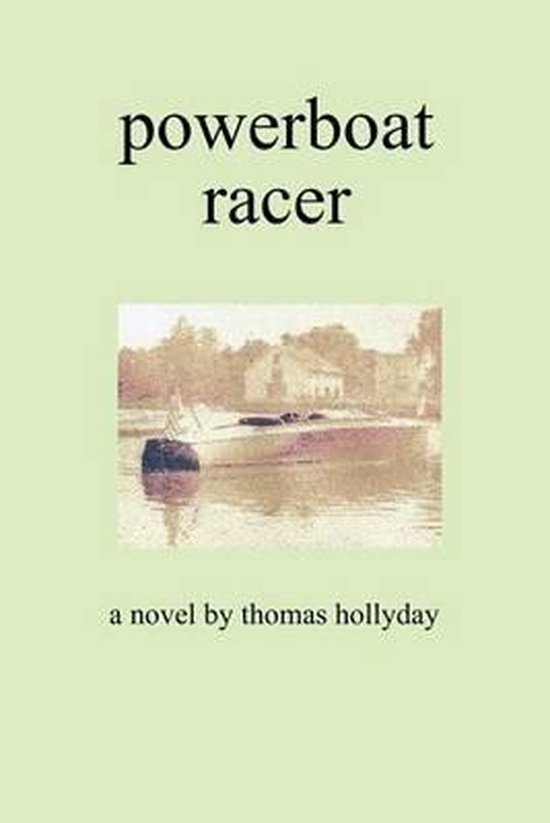 POWERBOAT RACER by Thomas Hollyday A disgraced foreign correspondent, Harry Jacobsen, starts a new life as editor of a small Chesapeake weekly. He quickly finds himself reporting what becomes the biggest story of his newspaper life after children find an old race boat sunk in a marsh and uncover a crime of absolute evil. It's a hot August morning one week before the Homer Kirby Memorial Powerboat Races at River Sunday on the Chesapeake and the streets are filled with excited drivers, boats, crowds and television network camera teams getting ready to participate in this important national championship. The boat belonged to a black man, the powerboat racer Walker John Douglas. Douglas used the racer to disappear thirty years ago after he was accused of killing two white women and setting the town on fire causing millions of dollars of destruction. A police search is organized to find his remains in the wilderness. This resurrects deep seated hatreds of lawman brutality and many loud arguments about the guilt or innocence of Douglas. The racial unrest of thirty years ago is reborn. Despite the excitement of the upcoming powerboat race, the town threatens to explode with street violence. Harry and his assistant Annie Till strive to find the true facts of what happened thirty years ago. Yet, at every step, they face danger and threats to their lives as they try to uncover clues to long hidden crimes. Then the day before the long awaited powerboat races are due to start their first race heats, a totally unexpected event jars the town even more and brings hundreds of protesters into the streets angrily clamoring for justice. Harry and Annie find love and respect for each other as they are pushed to the limits of their newsman abilities to close in on the truth. They must succeed or the mob will resort to even more deadly violence, resulting in another great town fire, and with all the visitors to the town, sure to be even more deadly and destructive than the one thirty years before. Thomas Hollyday's previous books include Magnolia Gods and Slave Graves, " A book worth reading for its vivid imagery and value system; it is hard to think that all of it is mere fiction, and it makes you want to actually visit the intriguing site." BookWire Review. Video reviews and readings from his books are available on YouTube. He is also a successful manufacturer of wildlife products which has added to his public platform especially in the environmental community. His background as well as reprints of reviews of his work both fiction, non-fiction and illustration can be seen at solarsippers.com
Toon meer Toon minder