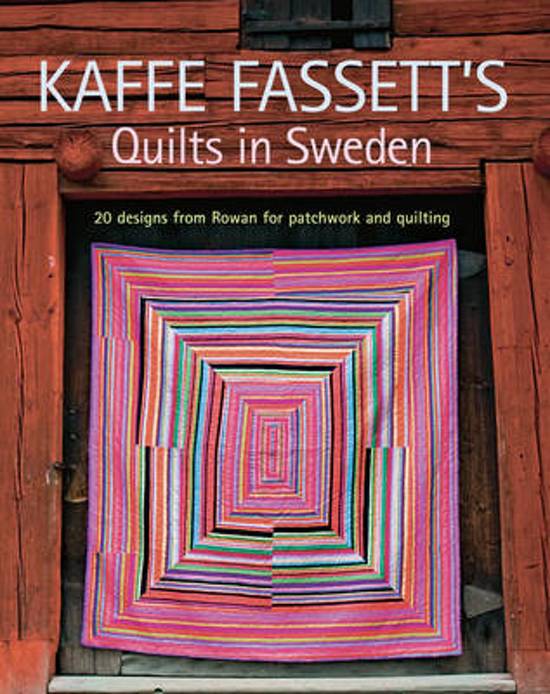 Kaffe Fassett was born in San Francisco in 1937. When he was 19, Kaffe won a scholarship to the Museum of Fine Arts School in Boston, but left after 3 months to paint in London. He settled in England in 1964.


Kaffe ventured into the world of colourful yarn on a visit to a Scottish wool mill with fashion designer Bill Gibb. Inspired by the colours in the landscape, Kaffe was thrilled to find the same colours in yarns. He bought 20 colours of Shetland wool and some knitting needles, and on the train back to London a fellow passenger taught him how to knit. His first design appeared as a full page spread in Vogue Knitting magazine.

In 1985, Kaffe launched a needlepoint project on the TV programme 'Pebble Mill at One', inviting anyone across the country to needlepoint an image of their favourite thing, no bigger that 6 inches square. Over 2,600 entries were sent forming the Pebble Mill at One Heritage Tapestry which was on show at Chatsworth House until it moved to Harewood House. The same year, the British Crafts Council invited Kaffe to present a BBC daytime television series interviewing leading UK crafts people. Since then Kaffe has inspired thousands of traditional one-colour knitters to employ rich palettes of colour through his 6 part television series, 'Glorious Colour' for Channel 4. The series was aired in 1986 has been repeated 3 times and was released as a two-part video. It has been shown in various countries including Japan and Canada. In 1998, Kaffe released 'Kaffe's Colour Quest', a video looking at colour and design inspiration through his world-wide travels. In February 1999, Kaffe presented a 6 part series for Radio 4 called 'A Stitch in Time'.

Kaffe has also been interviewed countless times on national television and radio programmes such as 'Richard and Judy' for 'This Morning'; 'The Bazaar' TV series; 'Chelsea Flower Show Live'; 'Collectors Lot'; 'The Homes Show' and 'Through the Keyhole.' For radio: Radio 4's 'Woman's Hour' and 'Desert Island Discs' with Sue Lawley.


In 1988 Kaffe became the first living textile artists to have a one man show at the Victoria & Albert Museum. The exhibition attracted such crowds that the Museum doubled attendance figures during the run and has since visited Finland, Holland, Norway, Denmark, Sweden, Australia, Canada, USA and Iceland (where 5% of the total population attended.) Recent exhibitions of textiles include the American Museum in Bath (UK), Sweden, Denmark, America and Japan. The Hankyu Department Store, Osaka, Japan invited Kaffe to create 3 room sets in their store, for a British fair, sponsored by the British Council. Over 30,000 people visited the display in 6 days. In June 1998, Kaffe displayed his quilts from his 8th book, 'Patchwork' at the Japan World Quilt Fair in Tokyo.

Kaffe's first needlepoint design was commissioned by Pamela Lady Harlech for Lord Harlech. Since then, commissions include; two 5-foot square needlepoint tapestry designs for the 1994 Marks & Spencer department stores Christmas packaging; tufted rug designs for Christopher Farr Hand Made Rugs; two 5-foot square needlepoint tapestries for the Sea Princess cruise liner; a needlepoint tapestry for an Elizabethan house in Yorkshire; a series of five tapestries and a tufted rug for The Edinburgh Tapestry Weaving Company; a 13' by 15' mosaic mural at the entrance to a theatre in Ojai, California; needlepoint arm chairs for clients around the world and an endless list of one-of-a-kind design garments.

Since 1981, Kaffe has worked closely with Rowan Yarns in Yorkshire. Rowan Yarns insight into fashion and colour complement Kaffe's skill and together they have produced ambitious designer patterns to inspire hand knitters all over the world. He contributes to the bi-annual Rowan magazine, which is marketed world-wide.

Since 1976 Kaffe has been the leading designer of needlepoint kits for Ehrman Tapestries of London, one of the most successful mail order needlepoint companies world-wide.


The international charity Oxfam asked Kaffe to work with poverty-stricken weaving villages in India and Guatemala, to advise on designs that would be more marketable in the West. As a result, a range of colourful hand woven fabrics is being produced for use as shirt fabric, bed throws and patchwork fabric, available on an international basis through Rowan UK and Westminster Fibres, USA. Other charity work has also taken him to South Africa.

A large part of Kaffe's output is now an expanding range of fabric prints for the patchwork market along with the Indian stripes fabric and shot cotton fabric range distributed world wide by Westminster Fibres, USA and Rowan, UK.

Hilliers Garden Centres invited Kaffe to design their garden for the 1998 Chelsea Flower Show. The garden featured his mosaic columns, planters and a shell grotto and won a Gold Medal and was written up as 'The trend-setting garden of the year's show'.

Kaffe gives slide talks and workshops on colour in design which take him all over the world, allowing him to see how people use his fabrics and pick up inspiration.

In 1993 the UK based Northern Ballet Theatre asked Kaffe to design costumes and sets followed by The Royal Shakespeare Company commissioning Kaffe to co – design the set and costumes for 'As You Like It'. Kaffe reveled in the Elizabethan period and used knitting, needlepoint, rag rugging and patchwork in the costumes. It was directed by Gregory Doran and opened in 2000, one of the most exciting commissions Kaffe has received to date.

Since the Millennium major exhibitions have included 'The Textile Tradition, Then and Now' (2001) and Quilt Bonanza (2003) both at The American Museum in Bath, plus shows at Stening Slott, in Sweden (2004) and Rohsska Museet, in Gothenburg (2004).

2005 has seen a variety of exciting commissions, projects and publications. Exhibiting quilts at the Textile Museum of Canada, involvement at the Yokohama Patchwork Festival in Japan and Kaffe's contribution to two group shows, 'The Artist and Radio 4' at the Bankside Gallery and a painting exhibition at the Catto Gallery, London has seen the year end with a prestigious invitation to design and decorate the Victoria and Albert Museum Christmas tree in collaboration with Kaffe's latest book publication 'Kaffe Fassett's V&A Quilt's'.

Kaffe's one man multimedia show in 2006 at the Prince Eugen's Waldemarsudde, Sweden was followed by an exhibition of Kaffe's quilts, knitting and needlepoint at the Modemuseum Hasselt, Belgium and 2007 continues with Kaffe embarking on a workshop tour of Australia and New Zealand and the launch of his latest knit book 'Kaffe Knits Again' due to be published by Rowan in September.

Kaffe's unique sense of colour and drive to create, combined with his desire to encourage others, has led to his reputation as a guru in the world of colour and textiles.
Alles van Kaffe Fassett
Toon meer Toon minder

World-renowned textile artist Fassett and his team of designers create famously stunning quilts. Over the years, Fassett has attracted a passionate audience of quilters, who will revel in this exciting new collection of 20 beautiful quilts, each a gorgeous display of the dynamic colorways, keen fabric choices, and brilliant design sense at work. 144 pp.