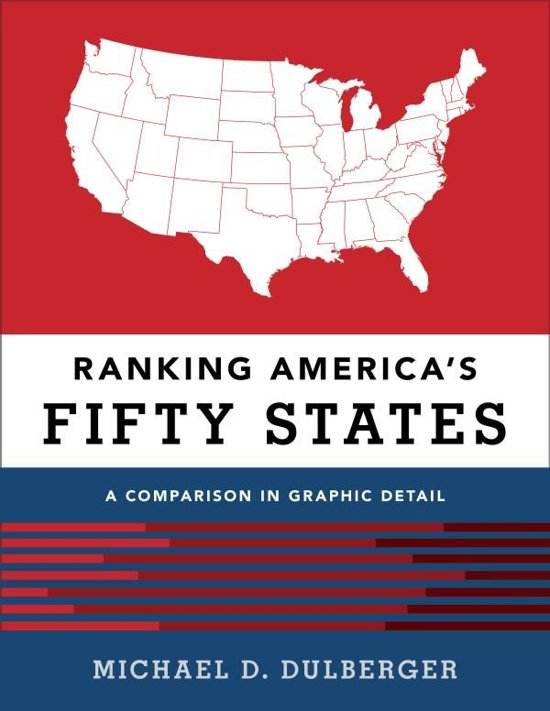 This full-color book provides a compendium of stimulating facts about the states, presented graphically, and covering a wide array of topics including demographic, economic, environmental, health, and crime variables. Hundreds of attributes are compared side-by-side, from life expectancy to murder rates; from fourth-grade math proficiency scores to the number of food stamp recipients, and from illicit drug use to the rate of firearm background checks per state.


Through meticulous organization and use of graphic formats, retrieval of specific information the reader may seek has been greatly facilitated. In addition to the graphs comparing the fifty states for each individual metric, a summary table is provided at the beginning of each chapter along with highlights of pertinent data found in the chapter.


While we are one, indivisible nation, at the same time Americans are as diverse from state-to-state as many nations are when compared with other nations. For example: in 2010, 95 percent of Vermont residents were white compared with only 24 percent of residents in Hawaii and 1-in-12 New York residents were Jewish compared with less than 1-in-1,000 Arkansas residents. In Texas, 464 prisoners have been executed over the past 35 years while 16 states have not executed any.

Ranking America's Fifty States consists of bar graphs of a variety of topics comparing state statistics. The information is culled from federal government sources, including the Census Bureau, the Federal Highway Administration, and the Bureau of Economic Analysis. The volume is divided by broad subjects, such as personal finances, economy, crime, and lifestyle. A concluding chapter shows states that have top- and bottom-ranked subjects-for example, users can easily reference that Montana has the highest air quality, Arkansas has the highest number of households without Internet usage, and Colorado has the lowest adult obesity rate. The editorial intent here is to 'deliver maximum knowledge with minimum effort,' and the work has succeeded. This is a useful source for students doing research in public, academic, and school libraries. * Booklist * This graphical compendium of facts compares data on a wide variety of demographic, economic, environmental, health, and crime topics. Almost 200 tables divided into ten chapters provide an array of information in a highly visual and meticulous fashion. In addition to the graphs comparing the 50 states on each metric, a summary table is provided at the beginning of every chapter, along with highlights of pertinent data found in that chapter. There are between ten and 20 charts per topic. Sources of the data are cited although there is no explication or interpretation of the information in the charts. Three appendixes and a detailed index conclude the book. Appendix 2, 'Top and Bottom Ranked States,' summarizes all states, ranking them highest or lowest on each metric-a helpful feature. Most of the data is available in a number of other sources including statistical abstracts, almanacs, and encyclopedias. However, the colorful charts in the Bernan resource, while somewhat selective, report on topics of high interest to researchers and browsers. VERDICT This is a very useful source of information for students and general readers in need of basic but popular demographic state data. * Library Journal * Readers interested in a snapshot of where our fifty laboratories of democracy' stand in relation to one another will find plenty of grist here in a visual, accessible form. Students looking for research topics in the areas of science or social studies will also find this resource useful for generating ideas. A worthy companion to the author's similarly designed America's Ranking Among Nations. * School Library Journal * Ranking America's Fifty States: A Comparison in Graphic Detail lives up to its title with an array of color graphs presenting straightforward, easy-to-comprehend statistical data comparing America's fifty states. From 'Daily Newspaper Circulation (15.1 per 100 persons nationally in 2009)' to 'Toxic Chemical Releases (3,386 million pounds nationally in 2009)', 'Medicaid Recipients (20.0 percent of population nationally in 2009)' and much more, Ranking America's Fifty States gives at-a-glance bar graph portraits that are immediately comprehensible to researchers and lay readers alike, enhanced with an index for quick and easy cross-reference. Highly recommended. * Midwest Book Review *
Toon meer Toon minder