Recognition or Disagreement A Critical Encounter on the Politics of Freedom, Equality, and Identity 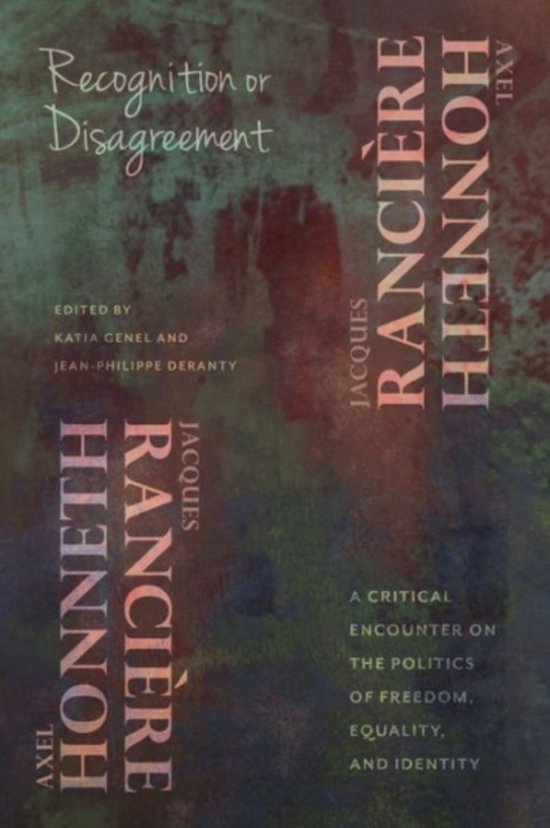 Axel Honneth is best known for his critique of modern society centered on a concept of recognition. Jacques Ranciere has advanced an influential theory of modern politics based on disagreement. Underpinning their thought is a concern for the logics of exclusion and domination that structure contemporary societies. In a rare dialogue, these two philosophers explore the affinities and tensions between their perspectives to provoke new ideas for social and political change. Honneth sees modern society as a field in which the logic of recognition provides individuals with increasing possibilities for freedom and is a constant catalyst for transformation. Ranciere sees the social as a policing order and the political as a force that must radically assert equality. Honneth claims Ranciere's conception of the political lies outside of actual historical societies and involves a problematic desire for egalitarianism. Ranciere argues that Honneth's theory of recognition relies on an overly substantial conception of identity and subjectivity. While impassioned, their exchange seeks to advance critical theory's political project by reconciling the rift between German and French post-Marxist traditions and proposing new frameworks for justice.
Toon meer Toon minder

When two hard stones are rubbed against each other, it produces sparks and light: this is what happens with this encounter 'in the real' between two major 'critical' philosophers of our time, both committed to democratizing democracy but addressing its current limits from opposite angles. A synthesis is not possible, though a commuting is immensely fruitful in order to elaborate one's own choices. The conversation is perfectly staged and commented upon by the editors. This book will be a point of reference. -- Etienne Balibar, author of Violence and Civility: On the Limits of Political Philosophy What form should critical theory take today? This is the question at stake in this encounter between two influential social and political philosophers. The editors expertly situate this dialogue within the terrain of contemporary critical theory, producing a text that will spark new conversations in the field. -- David Owen, author of Nietzsche's Genealogy of Morality After repeated failed efforts over the preceding decades to manufacture a debate or force an encounter between the putative representatives of German critical theory and French post-structuralism, this book may be the first to succeed at staging a genuine engagement between two preeminent figures in contemporary critical thought. This mise en scene ultimately produces its own mesentente-since each author says 'equality' and 'recognition' yet there is never the same understanding-but perhaps that is the book's greatest strength: to bring this dis-agreement into animacy, to attempt the distorting translation of these untranslatable terms, and in the process to allow the reader to experience the power of Honneth and Ranciere's thought. -- Samuel A. Chambers, author of Bearing Society in Mind: Theories and Politics of the Social Formation This timely and important book brings together for the first time two of the leading practitioners of what can be termed 'critical theory,' the borderland where critical approaches to social and political theory, philosophy, and other fields as dispersed as history, aesthetics, and psychology meet. In so doing, Recognition or Disagreement will help to revive critical theory as a politically engaged and philosophically rigorous intellectual endeavor that extends across disciplines, approaches, and traditions, and to renew the long but disjointed dialogue between German and French approaches to the field. It is a major contribution. -- James Ingram, author of Radical Cosmopolitics: The Ethics and Politics of Democratic Universalism In this fascinating and groundbreaking exchange, the eminent thinkers Axel Honneth and Jacques Ranciere discuss the differences between their respective paradigms of recognition and disagreement. Is social struggle driven by the desire for inclusion within established democratic forms or by a more radical impulse to challenge the legitimacy of the dominant order itself? Is the task of the theorist to reveal hidden forms of social suffering or to bear witness to the agency of the oppressed in the fight for equality? As well as clarifying their differences, the thinkers converge on the shared conviction that the experience of injustice must be of paramount concern for political theorizing rather than, as is more often the case nowadays, being regarded as a surprising deviation from the norm of justice. For anyone interested in the continuing encounter between French and German critical theory, this is an indispensable and thought-provoking read. -- Lois McNay, author of Bearing Society in Mind: Theories and Politics of the Social Formation
Toon meer Toon minder