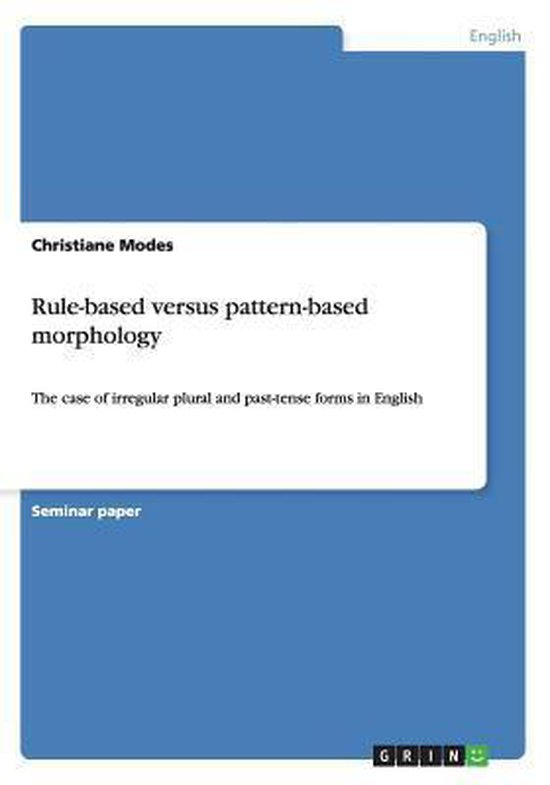 Seminar paper from the year 2013 in the subject English Language and Literature Studies - Linguistics, grade: 1,3, University of Würzburg, course: Lexicology, language: English, abstract: This paper deals mainly with the irregular forms of morphological inflection, namely the irregular past-tense forms and the irregular plurals in English. There are obviously two different models in the field of inflectional morphology which deal with these exceptional cases in different ways: the perspectives of ruled-based and pattern-based morphology. To describe these two approaches, a first definition should clear the most strikingly differences: in general, a rule is a given regulation to simplify and organise an action equally in each situation, to form a uniform and predictable product. A pattern is the product in reverse; it is the solution of an examination of different situations to find similarities in the process for adapting it to analogical situations. The question is: How do these approaches affect irregular inflection? Or the better question: How are they able to affect irregular plural and past-tense forms in English and where do they fail? This is up to the present a highly discussed problem in linguistics. Chapter 2 is about two morphological models: first the morpheme-based model, that regards each product as a sum of at least two morphemes that consist of a root and an affix modifying the root. The second part will present the word-based model that analyses the whole word as such to find out similarities (Bochner 1992 21-39). In Chapter 3 the advantages and disadvantages are discussed. Where do these models fit perfectly and in which cases do they fail or do have only partial validity? Chapter 4 will give a short introduction of a compromise of the two models. This theory combines advantages of both rule-based and pattern-based model, to eliminate or compensate failures the models have separated. The last chapter 5 is a conclusion to the discussed approaches, whether one model is more productive and therefore preferred. An outlook is discussed, whether a compromise or a combination of the two models is able to compensate the particular failures of each model or whether they rival to each other in a way that makes a combination impossible.
Toon meer Toon minder