Rwe. Analysis of the Human Resource Practices of One of Europe's Leading Energy Suppliers 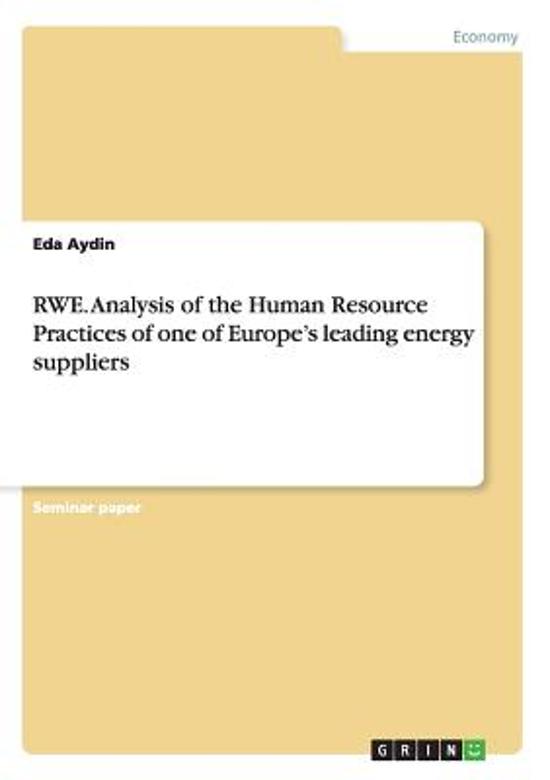 Seminar paper from the year 2013 in the subject Business economics - Business Management, Corporate Governance, grade: 1,0, Maastricht University, language: English, abstract: Historically the importance of human resources was long underestimated and the job of the HR departments in large corporations was mainly administrative (Noe et. al., 2010). The term human resource management only arrived in the United States of America in the 1980s. Only in the last decade business leader became aware of the importance of human resource decisions for the firm's success (Malik, 2009). Previously companies mainly saw this function as an unimportant and inferior department, more and more corporations today are realizing the strategic value a good human resource management can have for the company, especially in service-driven western economies (Noe et al., 2010). One of the most conservative industries concerning human resource management was the energy market, which placed less emphasis on it than most other industries. After all the common assumptions was that one is supplying a commodity and faces a stable demand. At the beginning of the millennium more than half (55%) of them engaged in outsourcing some or all of their HR functions in order to focus on the primary business and free up time for strategic action (Accenture, 2004). The energy market in Europe has been quite stable after its deregulation. Over time the industry consolidated and a few large corporations evolved. As one of the dominant players in the European energy market RWE AG is a good illustration of the changes the human resource department underwent. Founded in 1898 in Essen, Germany, RWE grew to become a dominant player in the European energy market with leading market positions in the largest European countries. Today, RWE employs around 72000 people and its revenues amount to 52bn (RWE AG, 2011). Furthermore, today it views its employees as its most important asset for the long-term success of the com
Toon meer Toon minder