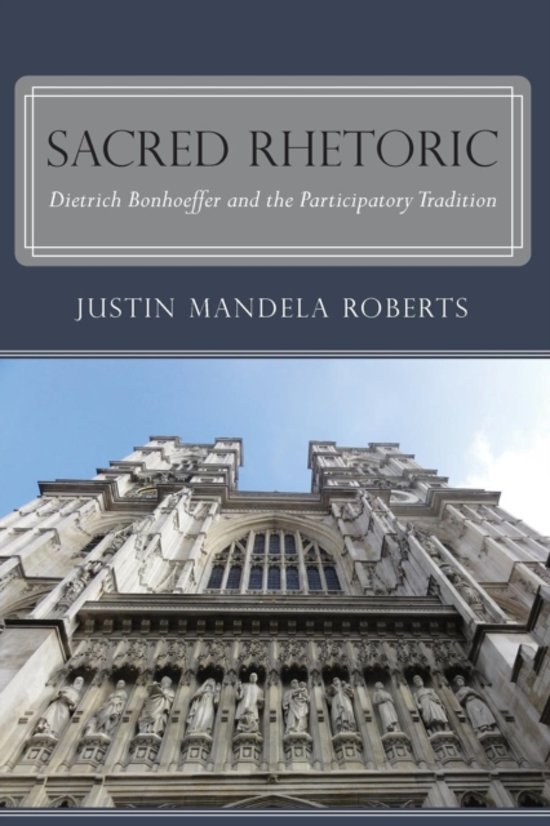 Dietrich Bonhoeffer is a celebrated and enigmatic figure in theology. Though he is known for advocating a concrete and worldly Christianity, Justin Mandela Roberts argues that his theology is in continuity with a participatory ontology, especially as seen in the ressourcement movement and Radical Orthodoxy. While critical of such ""metaphysical speculation,"" Bonhoeffer displays similar inclinations that situate Truth, Goodness, and Beauty as transcendental aspects of divine being. His theology affirms the pervasive ""rhetoric"" of doxology, details the economy of reciprocal gift-giving, and celebrates the sacramentality of creation. Sacred Rhetoric contributes to the ongoing discussion of metaphysics, and also serves as a supplement to the debate between Karl Barth and Erich Przywara. ""Justin Roberts' Sacred Rhetoric offers a reading of one of the twentieth century's more enigmatic theologians, Dietrich Bonhoeffer, within the context of contemporary retrievals of the metaphysics of participation and the gift. This is an imaginative interpretation of Bonhoeffer's work for our own time."" --Simon Oliver, Associate Professor of Philosophical Theology, University of Nottingham ""In this important and beautifully written contribution to Bonhoeffer studies and modern theology, Roberts demonstrates that Bonhoeffer can and should be read in continuity with the participatory theological tradition from patristic to medieval and modern theology. Bonhoeffer's life and work thus appear in fresh perspective, as representing the 'doxological modality' of the Christian life that engages the world out of union with God; a sacramental, sacred rhetoric that is most clearly expressed as worship."" --Jens Zimmermann, Author, Professor of Humanities and Canada Research Chair in Interpretation, Religion, and Culture, Trinity Western University Justin Mandela Roberts is a graduate of Regent College (Vancouver, British Columbia) and a PhD Student at McMaster Divinity College (Hamilton, Ontario). He is also the author of Behold Our God: Contemplative Theology for the Soul.
Toon meer Toon minder