'Who Set You Flowin'?' The African-American Migration Narrative 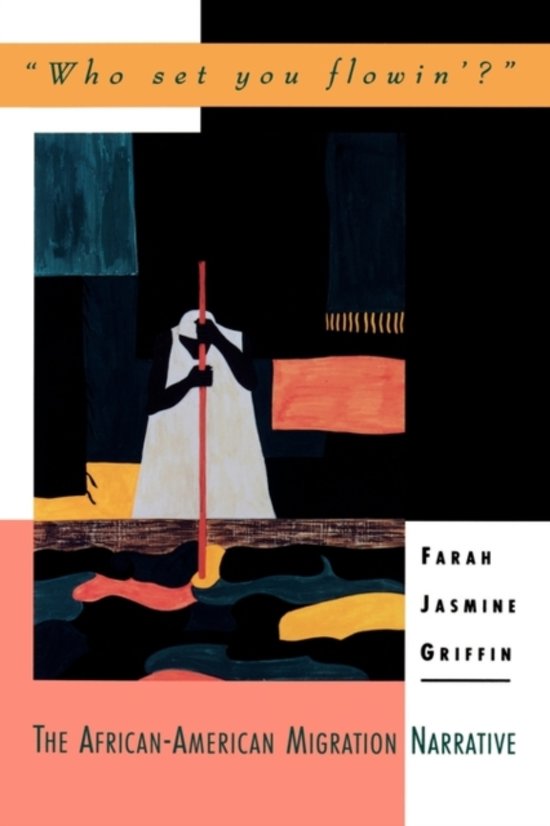 broad-ranging survey of African-American texts about migration.. * SAGE * Griffin has written an ambitious study marked by a rare enough combination of intellectual creativity and rigor. Who Set You Flowin'?. is excellent.-Journal of Blacks in Higher Education. Who Set You Flowin'?...is delicious brain food without the wordy rhetoric....Thanks to Griffin's writing and analytical skills, Who Set You Flowin'? breaks new ground.-Vibe Magazine Farah Jasmine Griffin looks at modern black migration from an interdisciplinary literary and cultural perspective, giving lavish critical attention to its creative artifacts, the photography, music, and literature that it inspired....Griffin has written an ambitious study marked by a rare enough contribution of intellectual creativity and rigor. Who Set You Flowin'? is excellent.-Journal of Blacks in Higher Education Farah Jasmine Griffin has written a bold and brilliant book, destined to assume a prominent place in the realms of American and African American literary, cultural, and historical studies. In its carefully contextualized, finely nuanced readings of texts as varied as the paintings of Jacob Lawrence, the poetry of Jean Toomer and Gwendolyn Brooks, the prose of Richard Wright and Toni Morrison, the blues of Billie Holiday and Bessie Smith, and the rap lyrics of Grand Master Flash and Arrested Development, Who Set You Flowin'? is a model of interdisciplinary scholarship that breathes new life into such old pardigms as the Great Migration,' the rural folk,' and the urban masses.' Informative, fascinating, and finely crafted. A pleasure to read.-Ann duCille, Wesleyan University Moving brilliantly across a vast range of textual spaces and political geographies, Farah Griffin flows with the fierce independence and passionate commitment of the migrants whose paths she charts. 'Who Set You Flowin'?' is in every way an exemplary work of U.S. cultural studies.-Eric Lott, University of Virginia In this new and suggestive study Griffin places many different forms of expression into a relationship with each other: Literary texts from Paul Laurence Dunbar, Jean Toomer, and Richard Wright to Dorothy West, LeRoi Jones, and Toni Morrison, visual arts from Jacob Lawrence's paintings to FSA photographs, music from Billie Holiday to Stevie Wonder, and varied documentary evidence are considered part of a larger 'migration narrative' that swept an urbanizing black America in the twentieth century. Inspired by Georg Simmel's famous essay 'The Stranger,' this book attempts to reconstruct the inwardness of the tension between belonging and alienation, between ancestry and migration, experienced by a people in motion.-Werner Sollors, Harvard University Because Griffin utilizes diverse cultural works, from Billie Holiday, Richard Wright, Jean Toomer, Jacob Lawrence, Toni Morrison, and others, as extended examples and for illustrations, she lends to her 'migration narrative' discourse a familiarity that the general reader can identify with, and that orientation will attract a wide readership inside and outside the Academy.-Booklist [An] important book....An extremely impressive book by a young scholar of immense promise.-Choice Farah Griffin is a new kind of intellectual of the younger generation. She goes beyond the fashionable mantra of Race, Gender, and Class by concretely situating black people constructing themselves as a heterogeneous community on the move geographically, culturally, politically, and existentially.-Cornel West, Harvard University.
Toon meer Toon minder