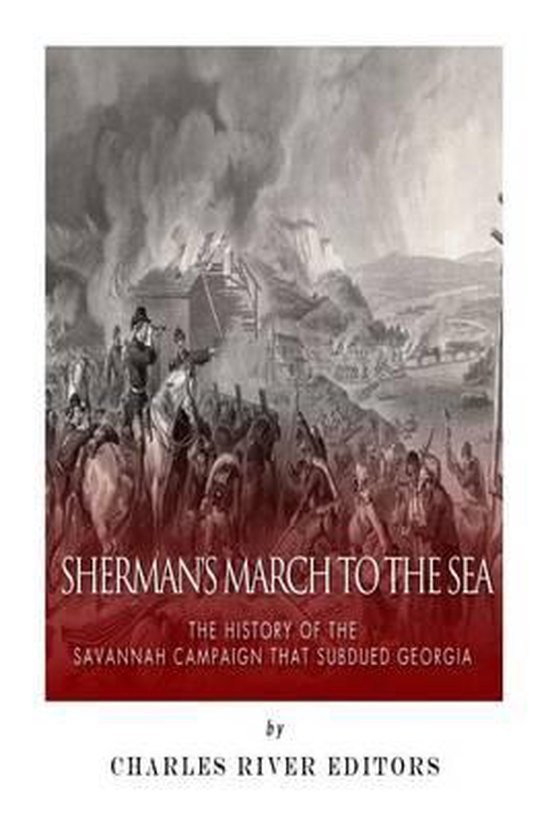 *Includes pictures of the battle's important generals.
*Includes accounts of the march written by important participants.
*Includes a Bibliography for further reading.
“I can make this march, and I will make Georgia howl!” – William Tecumseh Sherman “[N]o Civil War commander possessed a more astute appraisal of the nature of the contemporary warfare, how to form and pursue grand strategy, and the critical nexus between war, civil society, popular support, and electoral politics, And few American generals have since.” - Victor Davis Hanson, The Savior Generals William Tecumseh Sherman holds a unique position in American history. Synonymous with barbarity in the South, Sherman is lauded as a war hero in the North, and modern historians consider him the harbinger of total war. As a Union general, Sherman was recognized for his outstanding command of military strategy but criticized for the harshness of the "scorched earth" policies that he implemented in conducting total war against the Confederate States, especially in 1864 and 1865. Military historian B. H. Liddell Hart famously declared that Sherman was "the first modern general."Both Grant and Sherman shared the same theory of war: anything that might help the enemy's war effort should be considered a military target. Grant explained to Sherman that the Confederates must be “demoralized and left without hope,” and he instructed Sherman, “Take all provisions, forage and stock wanted for the use of your command. Such as cannot be consumed, destroy. Leave the valley so barren that crows flying over it...will have to carry their provender with them.” This strategy sought the total economic collapse of the South, as well as completely disabling the South’s capability of fielding armies. In addition to the wholesale plundering of Southern resources, including taking them from civilians, the Union reversed its policy of swapping prisoners, realizing it had a far bigger reserve of manpower than the South. The Atlanta Campaign was a perfect example of this, as both sides lost about the same number of casualties. By September 1864, however, Sherman still had about 80,000 men, while Hood’s army was reduced to about 30,000. Thus, with his remaining forces, about 60,000 strong, Sherman decided to take the unprecedented step of cutting his own communication and supply lines and commencing a widespread march across Georgia, destroying Southern infrastructure and living off the land until his forces reached the coast and linked up with the Union navy. Aside from those plans, Sherman did not appoint a fixed time for his arrival, and the concept of the march greatly concerned the Lincoln Administration, since his men would virtually be on their own without any contact with the rest of the North as they marched straight through the heart of the Confederacy. Grant expressed his own concerns but eventually gave Sherman a simple go-ahead: "Go as you propose." Foragers known as "bummers" (a group comprised of deserters, criminals, and other miscreants) were assigned to seize food from local farms, while the troops (both left and right wings) moved along the railroad lines, ripping up and burning the track as they advanced, leaving miles of severed telegraph lines in their wake. The troops also adopted the habit of heating the train rails over fires and then wrapping them around tree trunks, which became known as "Sherman's neckties." Ultimately, Sherman’s armies cut a path of abject destruction 60 miles wide and 300 hundred miles long from Atlanta to Savannah, which some likened to a Biblical blight. And as Sherman had intended, he did indeed made Georgia “howl.” Sherman’s March to the Sea comprehensively covers the campaign, including the fighting and the aftermath of the results. You will learn about Sherman’s March to the Sea like you never have before.
Toon meer Toon minder