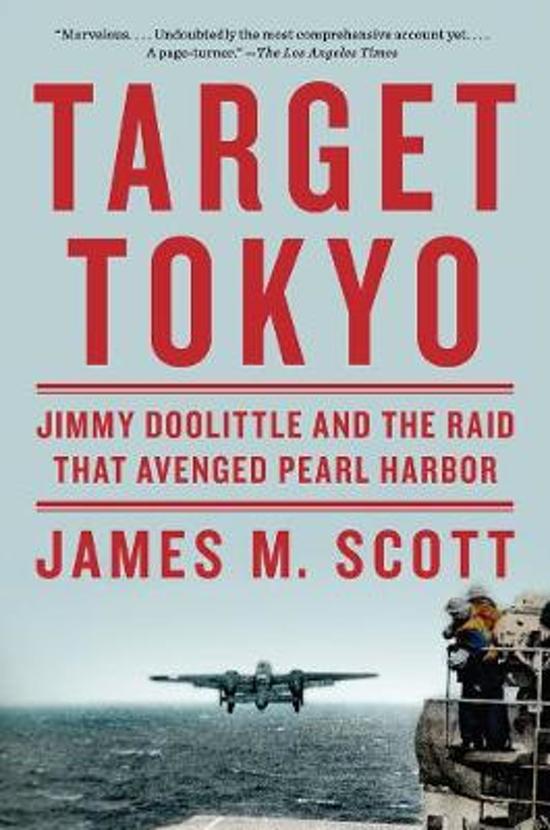 On April 18, 1942, sixteen U.S. Army bombers under the command of daredevil pilot Jimmy Doolittle lifted off from the deck of the USS Hornet on a one-way mission to pummel Japan's factories, refineries, and dockyards in retaliation for their attack on Pearl Harbor. The raid buoyed America's morale, and prompted an ill-fated Japanese attempt to seize Midway that turned the tide of the war. But it came at a horrific cost: an estimated 250,000 Chinese died in retaliation by the Japanese. Deeply researched and brilliantly written, Target Tokyo has been hailed as the definitive account of one of America's most daring military operations.

The Doolittle raid on Tokyo was one of the most impossible, daring, and consequential missions ever taken by American military men, and James Scott brings it back to the reader with you-are-there immediacy and drama. Filled with great characters, great heroism, and great suffering, Target Tokyo is at once thorough, realistic, and thrilling. -- Evan Thomas, author of Sea of Thunder and Ike's Bluff One of the most incredible accounts of American military valor I've ever read. -- Pat Conroy A terrific story and a cracking good read. -- Ian Toll, author of Pacific Crucible, War at Sea in the Pacific, 1941-1942 [A] brilliant tale of adventure and bravery...The telling is fresh and packs a wallop that puts it up with the best of World War II combat stories. -- Edward Cuddihy - Buffalo News Filled with thrilling heroism and sacrifice, Target Tokyo is the definitive account of the amazing Doolittle raid. -- Chris Patsilelis - Tampa Bay Times A fantastic story fantastically told. -- Charleston Mercury [A] breakthrough work of popular history. -- Michael Giltz - Huffington Post Scott is an agile writer who offers strong portraits of key figures such as Doolittle. And his immense amount of research enabled him to produce a book that appeals not just to military buffs, but to a much broader audience. -- Hal Bernton - Seattle Times The Doolittle raid and its effects need to be remembered; Target Tokyo will make them hard to forget. -- Ray Locker - USA Today Scott's tight prose and meticulous research provide a gripping and at times heartbreaking account of the raid. -- Bob Carden - Philadelphia Inquirer Vividly narrates the saga...Scott uses original, almost untapped sources and carefully balances praise for the 80 airmen's valor and a sober appraisal of the terrible costs. -- Alexander Rose - Wall Street Journal Gripping, compulsively readable...will have great appeal to anyone with even a passing interest in the Second World War. -- Terry Hartle - Christian Science Monitor
Toon meer Toon minder