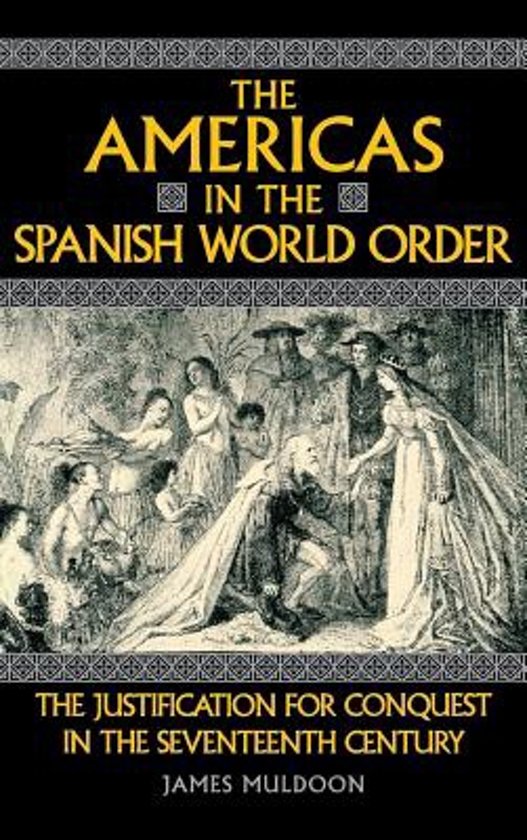 Juan de Solorzano Pereira (1575-1654) was a lawyer who spent eighteen years as a judge in Peru before returning to Spain to serve on the Councils of Castile and of the Indies. Considered one of the finest lawyers in Spain, his work, De Indiarum Jure, was the most sophisticated defense of the Spanish conquest of the Americas ever written, and he was widely cited in Europe and the Americas until the early nineteenth century. His work, and that of the Spanish School of international law theorists generally, is often seen as leading to Hugo Grotius and modern international law. However, as James Muldoon shows, the De Indiarum Jure represents the fullest development of a medieval Catholic theory of international order that provided an alternative to the Grotian theory.

Muldoon does an excellent job of Placing Solorzano's ideas into the context of medieval and early modern political theory and philosophy. He makes careful speculations about the intellectual process behind the composition of the De Indiarum Jure and therefore reconstructs an intellectual debate that will be useful for many scholars. -Renaissance Quarterly An important book that clarifies both the continued Spanish preoccupation with the legitimacy of conquest and colonization of the Americas and the persistent strength of medieval intellectual thought dating back, in large part, to the thirteenth century. -Sixteenth-Century Journal It is Solorzano's indestructible competence, his exactness and certainty in applying the categories of Aristotelian analysis, that makes reading about him a valuable experience. . . . Muldoon has done admirable work in restoring Solorzano to life, and it is clear from his conclusion that his commitment as a historian is to the recovery of the scholastic intellect no less than to the narrative of the Spanish encounter with the New World. It is this duality of interest which gives his book its very considerable value. -J. G. A. Pocock Muldoon is an able analyst, particularly apt at discerning nuance. Like a latter-day scholastic political theorist of the seventeenth century, he immerses himself and his reader in prevailing views on justification of colonial enterprise deeply rooted in medieval history and medieval concepts and notions about the nature of the world. Muldoon seems to admire Solorzano, to get inside him, in a way that Solorzano's views become Muldoon's, a virtue of this book, which can be read profitably today by those vexed by the need to justify intervention in the affairs of other nations or societies where tyranny, monumental injustice, exploitation, and inhumanity prevail. -American Historical Review
Toon meer Toon minder