The Foundations of Mind Origins of conceptual thought 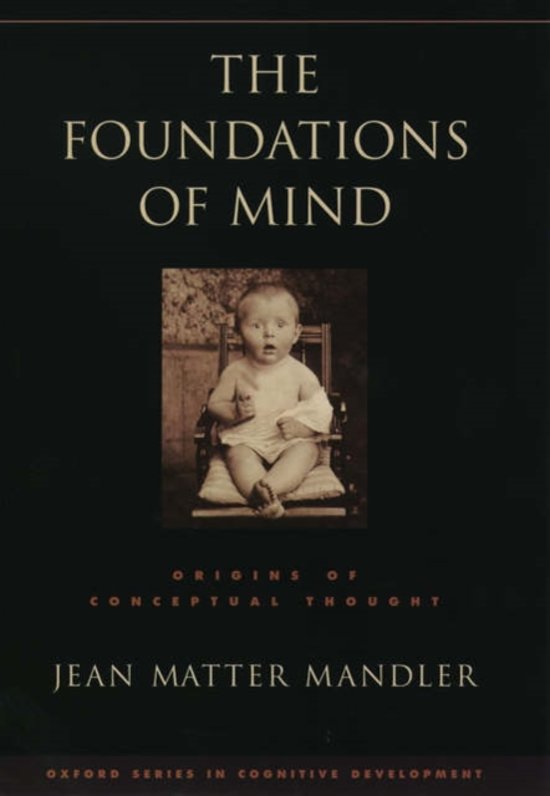 The Foundations of Mind presents a new theory of cognitive development in infancy, focusing on the ways that perceptual information becomes transformed into conceptual thought. Mandler tackles issues such as how babies form concepts and begin to think before they have language, and how they can recall the past and make inductive inferences. Drawing on her extensive research, she illustrates how these processes form the conceptual basis for language and advanced thought, stressing the importance of distinguishing automatic perceptual processes from conceptualizations about what is perceived. She argues that these two kinds of learning, though sometimes confounded in psychological experimentation, follow different principles, and that it is crucial to specify the particular kind of learning required by a given task. Early preverbal concepts, although typically more general than infant perceptual categories, allow infants to make the inductive generalizations necessary for them to form theories about the world and organize their developing conceptual system into a recognizably adult form. Mandler also addresses the neglected issues of how concepts such as animacy, inanimacy, agency, goal, containment, and support are represented in the mind. She suggests that image-schemas, used by cognitive linguists to represent underlying linguistic meanings, also format the basic concepts used by infants for inferential thought and language learning. She also shows how a mechanism that analyzes spatial displays leads to mini-theories about how various objects interact with one another. Countering strong nativist and empiricist views, Mandler provides a fresh and markedly different perspective on early cognitive development, painting a new picture of the abilities and accomplishments of infants and the development of the mind.
Toon meer Toon minder

Mandler's book offers a powerful new synthesis on the emergence of cognitive capacities in infancy and early childhood. It is a compelling and important treatment of the origins of higher level thought from a cognitive science perspective. I would recommend it highly to anyone interested in cognition or cognitive development. -Frank C. Keil, Professor of Psychology and Linguistics, Yale University The perceptual/conceptual debate about the origins of meaning in the human mind continues to rage in the cognitive sciences, a debate that Mandler confronts head on. A masterful overthrow of a number of entrenched Piagetian assumptions, this eloquently written book about the conceptual capacities of young infants and the roots of language and consciousness is backed by extensive, innovative experimental data. -Annette Karmiloff-Smith, Professor of Neurocognitive Development and Head of Neurocognitive Development Unit, Institute of Child Health, London What are the processes by which the helpless and apparently ignorant infants of our species turn into the knowledgeable two-year olds and twenty-two year olds? Jean Mandler here takes important and novel steps toward a unified answer. She brings together a lifetime of sharp experimentation, acute analysis, and striking insight to provide a scientifically satisfying picture of how babies come to conceptualize the world. For anybody-parents to professors-seriously interested in the origins of human mentality, this volume is required reading. -Lila R. Gleitman, Steven and Marcia Roth Professor of Psychology and Professor of Linguistics, University of Pennsylvania A deep and elegant book on the puzzling problem of how we humans make the leap (if a leap is what it is) from perceiving the world to making conceptual distinctions relating to it. Jean Mandler has the necessary courage and research experience to face up to the issues that have perplexed students of mind for millennia. Her book is not only highly informative but very exciting reading. Bravo! -Jerome S. Bruner, Research Professor of Psychology and Senior Research Fellow in Law, New York University
Toon meer Toon minder