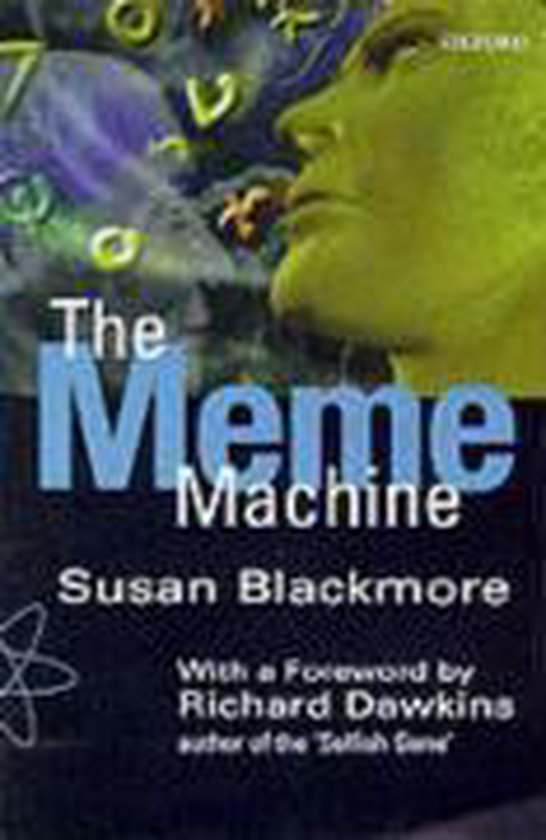 "Susan Jane Blackmore (born 29 July 1951) is a British writer, lecturer, sceptic, broadcaster, and a Visiting Professor at the University of Plymouth, in Plymouth. Her fields of research include memes, evolutionary theory, psychology, parapsychology, consciousness, and she is best known for her book The Meme Machine. She has written or contributed to over 40 books and 60 scholarly articles and is a contributor to The Guardian newspaper.

What is a meme? First coined by Richard Dawkins in The Selfish Gene, a meme is any idea, behavior, or skill that can be transferred from one person to another by imitation: stories, fashions, inventions, recipes, songs, ways of plowing a field or throwing a baseball or making a sculpture. The meme is also one of the most important--and controversial--concepts to emerge sinceThe Origin of the Species appeared nearly 150 years ago.
In The Meme Machine Susan Blackmore boldly asserts: "Just as the design of our bodies can be understood only in terms of natural selection, so the design of our minds can be understood only in terms of memetic selection." Indeed, Blackmore shows that once our distant ancestors acquired the crucial ability to imitate, a second kind of natural selection began, a survival of the fittest amongst competing ideas and behaviors. Ideas and behaviors that proved most adaptive--making tools, for example, or using language--survived and flourished, replicating themselves in as many minds as possible. These memes then passed themselves on from generation to generation by helping to ensure that the genes of those who acquired them also survived and reproduced. Applying this theory to many aspects of human life, Blackmore offers brilliant explanations for why we live in cities, why we talk so much, why we can't stop thinking, why we behave altruistically, how we choose our mates, and much more.
With controversial implications for our religious beliefs, our free will, our very sense of "self,"The Meme Machine offers a provocative theory everyone will soon be talking about.