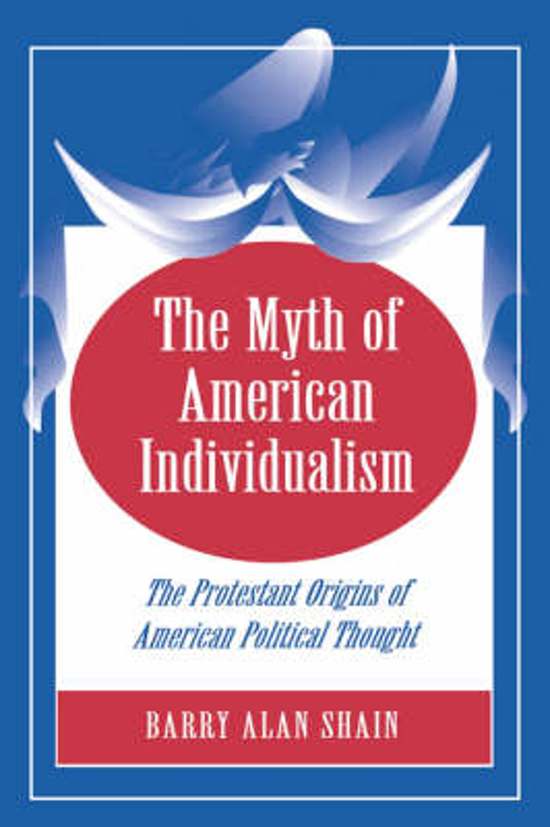 Sharpening the debate over the values that formed America's founding political philosophy, Barry Alan Shain challenges us to reconsider what early Americans meant when they used such basic political concepts as the public good, liberty, and slavery. We have too readily assumed, he argues, that eighteenth-century Americans understood these and other terms in an individualistic manner. However, by exploring how these core elements of their political thought were employed in Revolutionary-era sermons, public documents, newspaper editorials, and political pamphlets, Shain reveals a very different understanding--one based on a reformed Protestant communalism. In this context, individual liberty was the freedom to order one's life in accord with the demanding ethical standards found in Scripture and confirmed by reason. This was in keeping with Americans' widespread acceptance of original sin and the related assumption that a well-lived life was only possible in a tightly knit, intrusive community made up of families, congregations, and local government bodies. Shain concludes that Revolutionary-era Americans defended a Protestant communal vision of human flourishing that stands in stark opposition to contemporary liberal individualism. This overlooked component of the American political inheritance, he further suggests, demands examination because it alters the historical ground upon which contemporary political alternatives often seek legitimation, and it facilitates our understanding of much of American history and of the foundational language still used in authoritative political documents.
Toon meer Toon minder

Barry Shain is perhaps not so much an anti-liberal as a general troublemaker determined to cause embarrassment on all sides. In The Myth of American Individualism, he studies the years 1760-90, and he finds this period very much different from the one characterized by individualism which liberals have portrayed. On the other hand, he finds no secular republicanism of the kind celebrated by Hannah Arendt and the communitarians' she has inspired. ---Harvey Mansfield, Times Literary Supplement A fascinating work that does much to expose the hollowness of early American individualism. ---William J. Watkins, Jr., Chronicles With this tightly organized, carefully argued study, Barry Alan Shain makes a major contribution to the contemporary debate over the political ideology of the American Revolutionary ear. ---Thomas E. Buckley, Catholic Historical Review An impressive, well-argued, deeply researched book that enriches our understanding of early American history and arm us for current political struggles against the twin tendencies to cultural nihilism and political centralization. ---Eugene D. Genovese, First Things Shain's purpose is to articulate and defend for political philosophy and understanding of the American past which has been developing for several decades in social and intellectual history. In this effort he is remarkably effective. . . . Shain's striking conclusion is that the U.S. virtually backed into liberal modernity. . . . the book raises a host of important and in many ways novel questions. ---William M. Sullivan, Canadian Philosphical Review This book demolishes a central tenet of American civil mythology. . . . The author displays impressive command over a wide range of primary and secondary sources; his account moves seamlessly between social history and political philosophy. ---David Zaret, American Journal of Sociology Shain has gone a considerable way toward illustrating how America's lively experiment' was defined by profoundly Protestant, communitarian, and localist impulses. A must-read for scholars of colonial religion and politics. ---Mark S. Massa, Theological Studies In a provocative book, Barry Shain goes to great lengths to argue against the common conception of an America based on the absolute freedom of the individual to do as he or she sees fit. . . . Shain concludes that individual liberties as conceived in 20th-century America were not valued nearly as much as communal rights and communal freedoms. . . . He is a sophisticated thinker and a complex logician who impressively deconstructs the image of the Revolution's unfettered individualism. ---Zachary Karabell, Boston Book Review Barry Shain has ambitiously set out to deracinate eighteenth-century American individualism, leaving in its stead the roots of a Protestant localist political culture from which contemporary Americans might recover the language of community. The result is a fresh look at the values that animated America's revolutionary generation. --Joyce Appleby, University of California, Los Angeles
Toon meer Toon minder