We Boys Together Teenagers in Love Before Girl-craziness 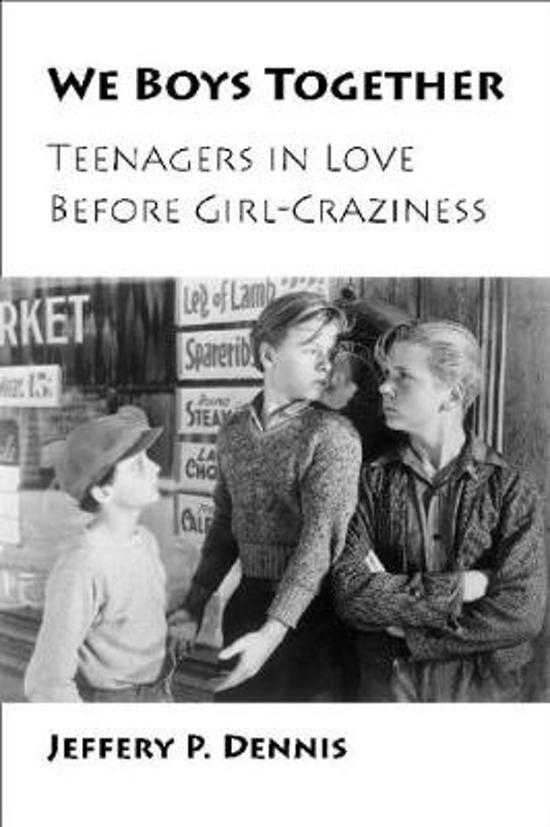 Teenage boys are wild about girls. When their hormones kick in at puberty, they can think of nothing else, and that's the way it has always been - right? Wrong. Before World War II, only sissies liked girls. Masculine, red-blooded, all-American boys were supposed to ignore girls until they were 18 or 19. Instead, parents, teachers, psychiatrists, and especially the mass media encouraged them to form passionate, intense, romantic bonds with each other. This book explores romantic relationships between teenage boys as they were portrayed before, during, and immediately after World War II, including - teenage melodramas: We'll always be together! ; Adventure Boys : I never knew what the treasure was... ; Henry Aldrich: Would you mind if I take you out sometime and buy you a milkshake? ; Andy Hardy: Hi, tenderfoot, drop by sometime ; Terry and the Pirates : I'd feel a lot better if I slept with you tonight ; Superhero and Sidekick : Come on, let's go home ; the Dead End Kids : They may be underprivileged, but they sure ain't underdeveloped ; the Little Tough Guys : Lots of guys go in pairs ; colonial fantasies: Stay away, this is my friend! ; the teenage musical: If there's a double meaning in that, I got it ; high school yearbooks: Tall, dashing, quick, and fair, spurns all girls with vigilant care! The author takes the reader through a rich landscape of media - sci fi pulps, comics, adventure stories, tales of teen sleuths, boys' serial novels, wartime bestsellers, and movies populated by many types of male adolescents: Boys Next Door , Adventure Boys , Jungle Boys , and Lost Boys . In Hollywood movies, Boys Next Door like Jackie Cooper, Ronald Sinclair, and Jimmy Lydon were constantly falling in love, but not with girls. In serial novels, Jungle Boys like Bomba, Sorak, and Og Son of Fire swung through the trees to rescue teenage boys, not teenage girls. In comic strips and on the radio, Adventure Boys like Don Study, Jack Armstrong, and Tim Tyler formed lasting romantic partnerships with other boys or men. Lost Boys like Frankie Darro, Leo Gorcey, and Billy Halop starred in dozens of movies about pairs of poor urban teenagers sticking together, with never a girl in sight.
Toon meer Toon minder

How did teenage boys go from the clubhouses warning 'No Gurls Allowed' to girl-crazy beach blanket bacchanals? Jeffery Dennis's astonishing study shows how this move was carefully orchestrated in post-war media. A roller-coaster of nostalgic TV watching, for which Dennis is a sure-handed, often eloquent guide. A book of both erudition and sly genius. --Michael Kimmel, SUNY Stony Brook, author of Manhood in America We Boys Together is a useful model and recommended resource. --Journal of LGBT Youth Anybody who is fascinated by boyhood (and, truthfully, who isn't?) will revel at the treasurehold of insights and observations in this important book. From the early days of film and through popular culture of the 20th century, Jeffery Dennis offers an intriguing and enriching view of the boyhood world too long kept in darkness. --Murray Pomerance, author of Johnny Depp Starts Here ...a comprehensive, well researched addition to the history of changes in the conceptualization of masculinity. -- Choice
Toon meer Toon minder