Whatever Happened to Party Government? Controversies in American Political Science 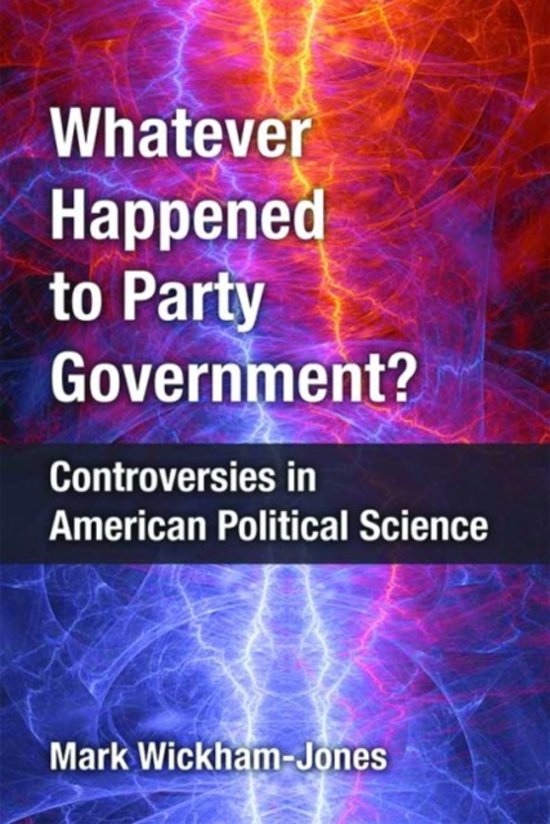 In 1950, the Committee on Political Parties of the American Political Science Association (APSA) published its much-anticipated report, Toward a More Responsible Two-Party System. Highly critical of the existing state of affairs, the report became extremely controversial: before publication, scholars attacked the committee's draft and suggested it should be suppressed. When released it received a barrage of criticisms. Most academics concluded it was an ill-conceived and mistaken initiative. Mark Wickham-Jones provides the first full, archival-based assessment of the arguments within APSA about political parties and the 1950 report. He details the report's failure to generate wider discussion between media, politicians, and the White House. He examines whether it was dominated by a dogmatic attachment to party government, and charts the relationship between behavioralists and institutionalists. He also discusses the political dimension to research during the McCarthyite years, and reflects on the nature of American political science in the years after 1945, the period in which behavioralism (which privileges the influence of individuals over institutions) became dominant. Detailing APSA's most direct and significant intervention in the political process, Wickham-Jones makes an important contribution to debates that remain in the forefront of discussions about American politics.
Toon meer Toon minder

There is nothing like this book in print. No one has traced the inside story of how the famous APSA report got produced in anything like this depth. It is a fascinating story! Among other things, the book is a wonderful, unmatched window into American political science of the mid-20th century as its professionals went about their business. - David Mayhew, Yale University As much archaeologist as historian, Mark Wickham-Jones dug up sources-unpublished papers, letters, memos, oral histories-buried in multiple sites across the nation. Using these sources and hundreds of cited publications, he shows how interpersonal relationships among party politics scholars has affected our views of party government in the United States. - Kenneth Janda, Northwestern University In 1946 the American Political Science Association asked its best and brightest to conceive of a responsible party system for the brave new world. In this masterful political history, Mark Wickham-Jones recounts with gripping detail the APSA task force's struggles to reconcile a dilemma of governance. How could disciplined party power, necessary to implement the activist postwar agenda, be reconciled with political responsiveness to voices far from the cloakrooms of Congress? At this critical juncture in American politics, it behooves us to revisit the deliberations and legacies of our predecessors. The struggles of the task force are our own, and Wickham-Jones' suspenseful story should be required reading for anyone concerned about the promise, folly, and fate of American politics. - Cathie Jo Martin, Boston University, Co-Chair of the 2013 American Political Science Association Presidential Task Force on Political Negotiation As our parties today struggle to actually govern, this surprising and thoughtful book takes us back to a time when political scientists placed their highest hopes for more effective and democratic government in the party system. - Jennifer Delton, Skidmore College
Toon meer Toon minder