One effect of Daniel Deronda was to make known to a wide circle of readers the vitality of Judaism as a system which still holds sway over the mental as well as the external life of men. During the few years which have passed since the publication of that great fiction, the interest in modern Judaism has continued to grow. It is but a short time since the Western world was startled by the outbreak of an ancient feeling against the Jews, which had been supposed to be long dead, at least in some of the quarters where it was displayed. The popular literature of the day also seems to indicate that the life of existing Jewish communities is attracting a large share of attention in the reading world. The charming pictures which Emil Franzos has drawn of Jewish life in the villages of Eastern Galicia, are not only popular in Germany, but some have been reproduced in a cheap form in New York to meet the demand of German Americans, and some have also been translated into English. The interest of English readers in the same subject is further shown by the recent translation of Kompert's Scenes from the Ghetto, as well as by Mr. Cumberland's still more recent and powerful romance of The Rabbi's Spell. Among students of philosophical literature a fresh interest has been awakened in the history of Jewish thought by the revival of the question in reference to the sources of Spinoza's philosophy. The affinities of this system with the familiar tendencies of Cartesian speculation have led the historians of philosophy generally to represent the former as simply an inevitable development of the latter, while the affinities of Spinozism with the unfamiliar speculations of earlier Jewish thinkers have been almost entirely ignored. In these circumstances a special interest may be felt in the life of one of the most remarkable Jews of modern times—a life which forms one of the most extraordinary biographies in the history of literature. Some account of the work was given in an article in the British Quarterly Review for July, 1885; but I thought that a complete translation would probably be welcomed by a considerable circle of English readers. The book has many attractions. If the development of the inner life of man can ever be characterised as a romance, the biography of Maimon may, in the truest sense, be said to be one of the most romantic stories ever written. Perhaps no literature has preserved a more interesting record of a spirit imprisoned within almost insuperable barriers to culture, yet acquiring strength to burst all these, and even to become an appreciable power in directing the course of speculation. The book, however, is much more than a biography; it possesses historical interest. It opens up what, to many English readers, must be unknown efforts of human thought, unknown wanderings of the religious life. The light, which it throws upon Judaism especially, both in its speculative and in its practical aspects, is probably, in fact, unique. For the sketches, which the book contains, of Jewish speculation and life were made at a time when the author had severed all vital connection with his own people and their creed; and they are therefore drawn from a point of view outside of Jewish prejudices: but they are penned by one who had been brought up to believe the divine mission of his people, as well as the divine authority of their religion; and the criticism of his old faith is generally tempered by that kindly sympathy, with which the heart is apt to be warmed on lingering over the companionships and other associations of earlier years. Maimon's account of Jewish philosophy and theology acquires an additional value from the fact, that he was caught in the full tide of the Kantian movement, and he was thus in a position to point out unexpected affinities between many an old effort of speculative thought among the Jews and the philosophical tendencies of modern Christendom. Since writing the above-mentioned article for the British Quarterly Review, I learnt that a volume of Maimoniana had been issued in 1813 by an old friend of our philosopher, Dr. Wolff[4]; and through the kindness of a friend in Leipsic, I was enabled, after some delay, to procure a copy. It is a small volume of 260 pages, and adds extremely little to our knowledge of Maimon. Nearly one third is simply a condensation of the autobiography; and the remainder shows the author with the opportunities indeed, but without the faculty, of a Boswell. He has preserved but few of the felicities of Maimon's conversation; and what he has preserved loses a good deal of its flavour from his want of the lively memory by which Boswell was able to reproduce the peculiar mannerisms of Johnson's talk. Still I have culled from the little volume a few notes for illustration of the autobiography, and I am indebted to it for most of the materials of the concluding chapter. All my additions are indicated by ''Trans.'' appended 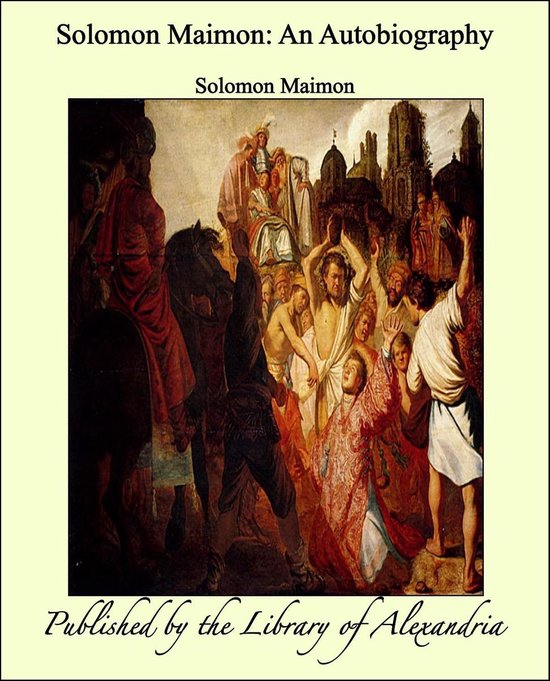