1899 Journey to Mars: A Steampunk Novel 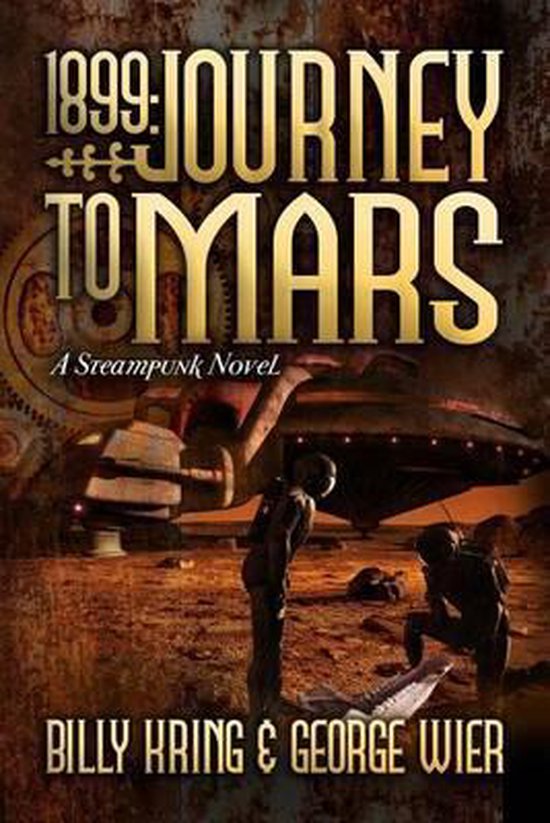 It’s been ten years since the ill-fated voyage of the Arcadia to the Moon. In that time, Billy and Ekka have married and raised their son, Dakota. But Billy Gostman—once known as Billy The Kid—has done anything but settle down during the intervening years. His eyes have been on the night sky and his thoughts have been on rescuing a companion from the Arcadia expedition, John Koothrappally. To add to his troubles, agents from governments around the world are scrambling for the secret of the incredible space-faring ship, and will stop at nothing. When Pat Garrett shows up in Waco to question Billy at the behest of President McKinley, the agents of a secret world power close in with their deadly clones and their Westinghouse robot. Billy, Ekka, Dakota, and Pat—along with their own Tesla Guardian Ultra 3 robot (“Guthrie”, for short), must first rescue an old friend on Ceylon from execution before charging once again into the ether aboard Billy’s new ship, Argent—with Mars as their destination! Along the way they pick up former Captain John Carter (C.S.A), his sidekick Ian Mackenzie, and Bixie Cottontree, a voodoo priestess and seer. It’s war in space and an even greater war on the distant world named for the God of War himself. And this time, the odds are even longer. ACCOLADES FORTHE FAR JOURNEY CHRONICLESKring and Wier vault to the head of the burgeoning steampunk genre with this hyper-extrapolated, richly detailed saga. Every nut and bolt is tightened in place, and the cast of characters is a rogue’s gallery of 19th Century mad scientists, outlaws and adventurers. I haven’t had this much fun going to the Moon since H.G. Wells sent Bedford and Cavor into the sky. —KW Jeter, author of Infernal Devices and Fiendish SchemesReads in the best way like a lost Jules Verne and H.G. Wells collaboration. Sense of wonder and the magic of great storytelling drive this fast-paced, steam-driven tale to a stunning conclusion with some adventurous stops along the way.—Joe R. Lansdale, author of Cold In July and The Bottoms1889: Journey to the Moon is a rip-roaring steampunk thrill-ride with a wonderful cast of characters. Bring on the sequel!—Bill Crider, author of the Sheriff Dan Rhodes MysteriesKring and Wier elevate the steampunk genre to its pinnacle in 1889: Journey to the Moon. More than Verne, more than Wells, these two have created a thrill-a-minute adventure with a menagerie of unlikely characters, such as Billy the Kid, Nikola Tesla, George Custer and so many others. And what’s truly amazing, the science is plausible! This book will astound and entertain. Add in the special bonus of authentic language, dress and mannerisms, and you have the makings for a classic SF/steampunk novel that will go down in history—or rewrite it!—T.R. Harris, author of The Fringe WorldsBilly Kring is the author of two Hunter Kincaid mystery novels: Quick, Outlaw Road, and The Empty Land as well as two Ronny Baca mystery novels, Baca and L.A. Woman. He recently penned the romantic suspense novel Where Evil Cannot Enter, writing as B.G. Kring. Besides writing on The Far Journey Chronicles, he is working on a high fantasy trilogy. He lives in a small town in South Texas, the same town where he grew up. Visit his website at billykring.com.George Wier lives in Austin, Texas with his lovely wife Sallie, two cats and two dogs. He is the author of the Bill Travis Mysteries. He writes mystery and crime, action-adventure, science fiction and steampunk. He also plays country fiddle and dabbles in art and photography, as well as public speaking on the subject of writing. Visit his website at georgewier.com, his Facebook page at George Wier-Author, and on Twitter at @BillTravisWrite.
Toon meer Toon minder