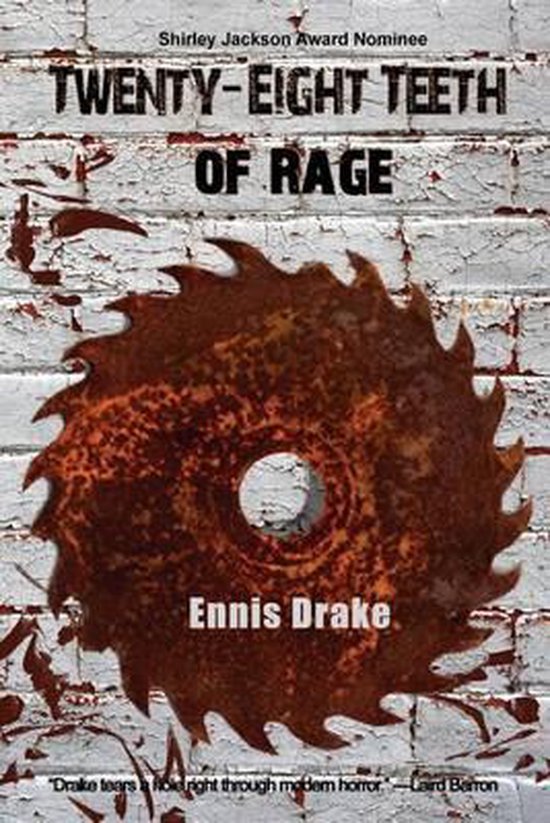 Nominated for the Shirley Jackson Award One man ravaged by disease, the other by war, their stories--and fates--bound by an ancient entity that thrives on suffering.
For Detective Ernest Riley, the path to damnation begins with an anonymously mailed recording detailing a series of grisly murders. Can Riley unravel its secrets without sacrificing his humanity? Or will he surrender to the RAGE inside him?
Strom Wheldon has returned from Iraq a literal half-man. But he's lost more than his legs to that desert Hell. He's lost his will to live. Can love save him from the RAGE eating him from within? Or will a gift given in innocence cost him everything?
"28 Teeth of Rage has the bite of a crocodile. Drake tears a hole right through modern horror. This guy isn't on the way; he's kicking in the door." - Laird Barron, award winning author of THE IMAGO SEQUENCE, OCCULTATION, and THE CRONING.
"A powerful work of horror. Drake's prose beats with a million-mile-an-hour force, propelling you through meat and sinew with a terrifying bite. This is not a work for the weak, for the timid. With beautiful language and raw power, Drake takes you on wrenching journey into our worst desires. A propulsive read by a fantastic new voice in the genre, one you're likely to never forget." --Simon Strantzas, author of "Nightingale Songs"
"This is a tale of possession and madness, but the kind that any sane person will understand. Drake gets inside the heart and mind of each character and never stops digging for the truth. You know these people. I know them. They have suffered terribly, and they are haunted by their loss. At the same time they are the inheritors of the spectacular horrors human beings have hurled at one another throughout our blood-spattered history. This is a hell of a ghost story, one you won't forget thanks to Drake's storytelling ingenuity, but also because it springs directly from our collective well of grief and rage. This animal howl- for justice, for retribution- resonates within us, and is unanswerable." - S.P. Miskowski, author of the the Shirley Jackson Award nominated novel KNOCK KNOCK
Toon meer Toon minder